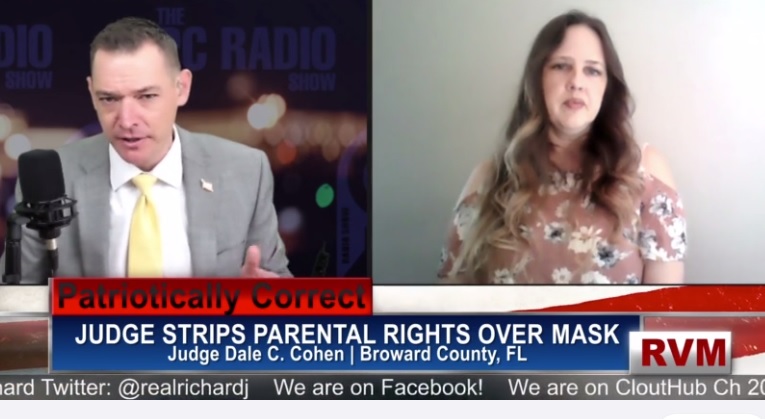 Establishment judges are a big problem in serving justice in any country including the United States. What a Florida judge recently did to the mother of a young boy with special medical needs is the textbook case of lawlessness in the deceptive robe of law.

Broward County District Court Judge, Dale C. Cohen refused Melanie Joseph the right to see her son because she posed maskless in a selfie on Facebook. As reported in Populist Press, Judge Cohen ruled that Melanie Joseph cannot see her son until COVID is completely gone and that she must get vaccinated also. And if that wasn’t enough, the judge added that the boy must also wear a mask at all times while around her during visitation.

Stew Powers of Red Voice Media interviewed Melanie about her case. The video of the interview is included below.

What is obvious is that this is not a judge doing his duty. It’s an establishment puppet dancing to the tunes of the pharmaceutical mafia and its network of allies that want to force vaccine on everyone. Scores of readers and viewers who learnt of this story have expressed their support for the mother – the victim of a leftist activist who thinks he can rule people like a Nazi dictator instead of fulfilling his duty as a justice provider.

Zone News reported that Judge Cohen has a history of such judicial misconduct and was actually forced to recuse himself from the custody case after an audio of his ranting against “anti-mask people” surfaced.

Broward County Circuit Court Judge Dale Cohen has repeatedly suspended parental timesharing arrangements for mothers who have been caught not wearing masks, according to interviews with parents and stunning audio and court documents obtained by NATIONAL FILE.

This has provided new hope for the mother and the boy separated by the politically biased judge who is openly incapable of ruling on the basis of law and civil rights.

Melanie Joseph is calling on people’s help via a fundraiser to fight this legal battle for the custody of her son to reunite with his siblings that live with her.