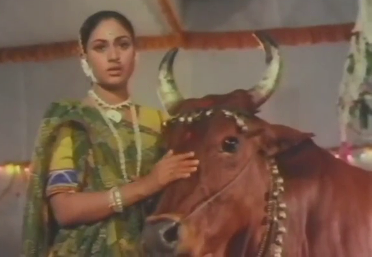 I always loved animal-themed films and there are a number of them made in the golden era of Bollywood. Gai Aur Gori

(meaning “The Cow and the Lass”) is such a gem from 1973. It’s a heartwarming film about the bond of belongingness between Vijya, a poor but straightforward girl of rural upbringing, who has no family, and her pet cow, named Lakshmi. The two of them are inseparable; but life becomes a trial for them when Vijya is married to an abusive husband.

Showing kinship between a cow and a human on screen is not that easy, and more so for the part of the cow – for we have known dogs as great actors, but not many cows have made it in showbiz. However, this film is truly a cow’s special. Lakshmi delivers winning expressions and all the moves a silent actor of talent can to win the audience. Many acts of adventure and emotional moments fill the scenes of the movie and keep it interesting until the end.

Jaya Bachchan as the outspoken village girl and Shatrughan Sinha as the bad husband both make their characters come live. The film is a rare treat in the list of old Hindi cinema when traditional values were shown part of daily life, and a cow was too worthy of respect to be ignored for a potential lead role in a film. The good old days with some wonderful and unusual characters, as Lakshmi!