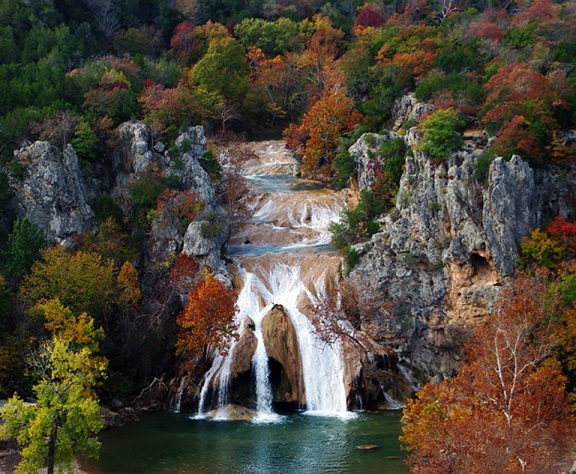 Each of our fifty states have many natural attractions which draw tourists who bring revenue to the states in which the vacation spots are located. Texas has the Big Bend State Park, located in the Davis Mountains in Far West Texas. I have been there, and I can promise a real treat for anyone who decides to visit.

Another field trip I took was on July 24, 1966while I was vacationing in Oklahoma. This particular trip was arranged by Dear and her sister, Hellen Dillingham. It had been in the planning stages for some time.

On July 24, 1966, we went to three places; Turner Falls State Park, Sulpher Springs And Devils Den State Park. All three parks are located in Oklahoma, they bring tens of thousands of tourists to Oklahoma each year.

We rose early on the morning of July 24, 1966. Mamma helped prepare the picnic lunch we would have that day. Aunt hellen prepared a salad with cottage cheese and Jello that she had chilled to take with us. The short trip to Turner falls was nice. I remember the sun peering through the car windows as it rose in the sky overhead. The weather was just right for a trip like this. I remember Dear paying the Park fee, and walking to the falls. I couldn’t see it, but they told me that it was beautiful. I could imagine the waterfall’s beauty in its sound. After collecting some rock samples, we had lunch at one of the picnic areas. The food was good, the most memorable part of the meal was the jello salad. We relaxed a while, then headed to our next stop. Sulpher Springs. It is located north of Tishomingo in Southern Oklahoma. The park has a series of water fountains where guests can sample the various types of mineral water This was a new experience for me. I liked the taste of the water, and it has been said that many tourists go to sample it for its health benefits.

West of Tishomingo lies Devils Den State Park. It is so named because it is extremely hot there in summer. The area is nothing but boulders and caves, not the type of place where farmers can grow their crops.  The famous outlaw Bell Starr hid out in one of these caves during her day. Again, I collected rock samples, and Uncle Hick and I went in to one of the caves. While we were inside the cave, it began to rain. Dear thought it best if we left, so we climbed in to the Pontiac and headed back to Calera.

All in all, it was a very good day. I still have the rocks I brought home from those parks; they may be somewhere in our garage. This trip was one of the best trips of its kind I have ever had. Only the trip to Little River in the Arbucklesin 1964 comes close.

The Doll has spent the last two months in Oklahoma. I asked her if she had ever been to Turner Falls, and she said that her great-grandmother took her while she was there. She enjoyed it. I am glad she got to go. She hasn’t made it to Devils Den or Sulpher Springs yet, but I hope that will happen someday. After reliving my trip fifty years ago, I had to ask the Doll if she ever went to turner falls. I am glad she did, and I am glad she enjoyed it.