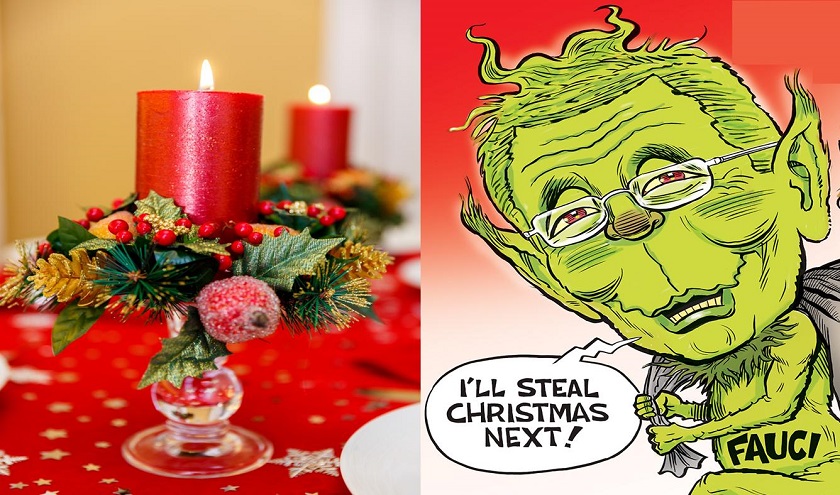 One of the most dangerous and high-profile criminals, who operates above the law in America, wants people to be scared of their relatives and friends if they have refused to take the useless and dangerous COVID shots. Welcome to Fauci’s America!

Dr. Anthony Fauci, deceptively presented as an expert on the so-called COVID-19, has urged Americans not to invite their unvaccinated relatives and friends to Christmas gatherings. Daily Mail reported today that Fauci is using the so-called Omicron variant as justification for his recommendation of banishing the unvaccinated from Christmas celebrations

The pandemic hoax has been used by the corrupt and criminal governments for almost 2 years now to enslave the world nations, isolate and hold hostage otherwise free people, and impose useless and dangerous vaccines on them against their will. Fauci, who has been shown to fund the dangerous Wuhan lab research that supposedly led to the disease deceptively presented as a pandemic, has played a key role in the new tyrannical laws for Americans by an illegitimate administration.

Under the deception of health risk, American society has been held hostage to the advantage of corrupt science, corrupt media, corrupt government, and big pharmaceutical corporations. Two years ago, it was inconceivable to order Americans to cover their faces in public; that only happened to oppressed women in some Muslim countries. A number of useless and dangerous vaccines had already been imposed on children over the decades in the west and some countries in the third world. But imposing vaccines on adults was not in the worst nightmares of members of a free society.

So Fauci, Bill Gates, and the web of other influential criminal-minded people and organizations came up with the fastest path – a manufactured pandemic. Nothing would be believed and accepted as readily as something sold as “science”. This would be used to change the way people live and cancel those traditions and values that go opposite to the leftist political agenda of the globalists. Christmas and family gatherings are such traditions. The same corrupt people telling us that the unvaccinated are the risk hide the fact that the vaccinated are the ones mainly infected and dying of the COVID they want us to dread.

Without scientific evidence of a new coronavirus or variants, the criminals in high offices and white coats have waged a war on the world. In America, their worst enemies are those who refuse to buy their fake science and their useless and dangerous pharmaceutical products. That is why they want the ignorant ones to hate their unvaccinated relatives and friends. There is nothing called a COVID pandemic or Delta variant or Omicorn variant; these are all lies. The reality is that a criminal administration has taken over America and radically wants to destroy as much of this society and its culture as it can in the time while it still holds the power. Dividing people is their most powerful weapon. And it is up to the people to not play in the hands of these culprits.