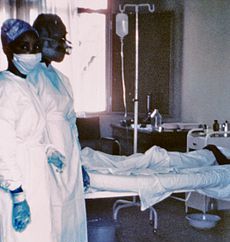 As the first case of the deadly Ebola infection has been confirmed in the US and another one in Dallas in under investigation, questions are arising about the reliability of White House and health authorities in informing the public with facts.

Louisiana Governor Bobby Jindal today called on the White House to ban travel from Ebola-infected countries into US. He referred to President Obama’s assurance to the public that Ebola reaching the US was unlikely. He stated that US citizens need to be protected from the disease while the CDC continues to deny the necessity for a ban flights from Ebola-infected countries.

Though WHO imposed traveled restrictions on Pakistanis earlier this year to promote vaccination of polio, even to adults who rarely catch polio, it has been ignoring concerns of citizens around the world about potential Ebola outbreak from infected countries in Africa. This despite the fact that Ebola is much more deadly and contagious than polio and can infect and kill any age people. Is WHO again proving that it is interested in getting multi-million dollars worth of vaccination projects instead of actually controlling an epidemic?

Signs of protest against the authorities on Ebola issue are also emerging now. Yesterday, Dr. Gil Mobley protested against what he called CDC’s Lying At the Atlanta airport in a Hazmat suit.