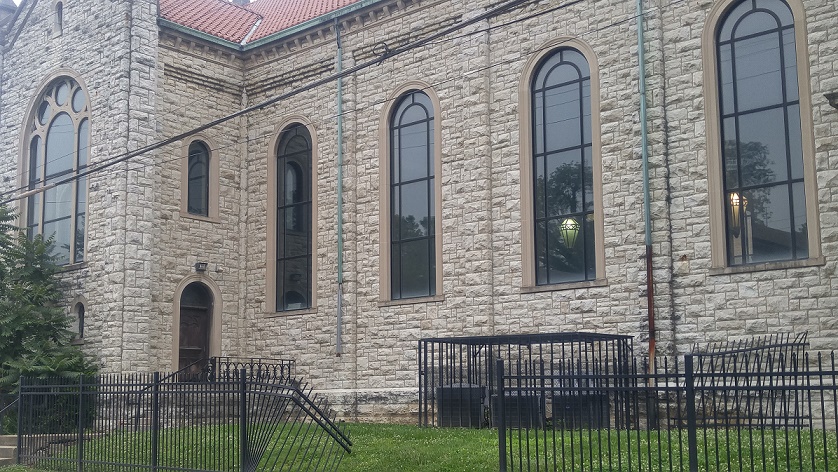 I went to Cincinnati, Ohio, on a work assignment and stayed in a beautiful historical home. I began to look at the neighborhood and to my amazement found out some interesting things.

Two doors over from the home was an old Catholic Church named Saint Pius that was no longer a church but was run by a nonprofit that creates housing opportunities for people along with having home purchasing classes. They took the pews out of the main sanctuary and now what exists is desks and office equipment. I asked the nonprofit if I could take a look inside because I was simply amazed that such a thing was going on. They gave me a quick tour but I was not allowed to go into the main sanctuary because class was in session. My heart was a bit shook-up as I thought about how in past times the Catholic Church had its doors open for anyone to embrace the sanctuary of God at any time. I asked myself how this all could have happened.

As I toured around the old Church, so much caught my attention—broken steps that led to the church, an old door falling apart, broken gates along with houses and buildings adjacent to it that are in distress. My heart still could not handle the overwhelming bubble that rose up in me. I looked at the history of our forefathers who came to this country with a dream. All of this at one time was someone’s dream that now looks as if it is no one’s. When we have a dream, we cultivate and care for it; our hands and harts don’t give up on it. We make it our movement and it’s obvious that the forefathers did just that. They built these old houses, the streets and that very Church. I said to myself, the people need hope that is what they need.  I began to think about my faith as a Christian and the bible verses such as Hebrews 3 v 4, “For every house is built by someone, but the builder of all things is GOD. “

I kept looking deeper into my heart for answers, I felt as if history was repeating itself. On the next block was another Church run by the Orthodox Eritrean community. These people came here for a better life. I stood there, taking pictures of their Church while a group of young Eritrean men walked by, watching me, and started speaking in their language and suddenly said the word “police”. They thought I was the police and that shifted me a bit; I began to feel a bit unsafe. I went on my way and as I got to the end of their church, I noticed on the back of it was a portion that looked like a house attached.

Walking towards me was a man I will call “Joe”. I asked him if he would speak with me for a moment about the neighborhood. He began to tell me that he was raised in Saint Pius Church and also went to the school there. He said it was good and he liked it but that things changed somehow and that the organization that is presently in the church is really trying to help people.  I asked him, how an organization replaces a faith even though they are advocating hope through housing. He said, “You know really if Christ lives in your heart that is his home and that is all you really need.” I agreed with that for sure but what I will say is that we cannot take that which is holy and water it down because the Church is his home and dwelling place.

As I looked through the Churches windows, one of them from the inside had wires over for protection. Yet, from the outside, one of the other windows showed a light that was on inside. In addition was a beautiful garden of roses gated so no one on the outside could come in, only those from the inside. I looked at these images as a type of message in my mind and began to think that if the light of Christ is on the inside of us or within the Church then why wires or bars on the outside. There are lots of reasons why these places of worship are not in existence presently, yet what we still need is faith. Oftentimes many spiritual beliefs have been compromised by other systems.

See below pictures of the church in Ohio.

Michell Spoden is a survivor of a cold case rape case and author of the book Stricken Yet Crowned. She has an associate’s degree in Business Science Administration and is presently working on her Bachelors in Project Management.