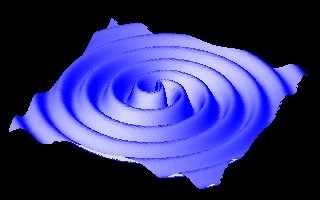 Update: The original title of the post read “Gravity Waves” and has been edited to avoid confusing the concept with the known gravity waves in water bodies. The accurate term for cosmic ripples in space-time arising out of the force of gravitation is “Gravitational Waves”.

The story that is the breaking news of mainstream media today is the claim of a team of international scientists in America that they have detected gravitational waves. This in effect means that ripples of gravitational energy created by motion of massive objects in space (think of astronomical scale) have been sensed or observed.

As LIGO Collaboration claims on its website, the waves were detected by the detectors last year in September in Louisiana and Washington. Their report says that based on their signal calculation, the collision of the black holes took place around 1.3 billion years ago and “the source was located in the southern hemisphere.”

As media worldwide is abuzz with this claimed discovery – for the first time in human history (at least the known one) – an audio recording of the event is also in circulation along with media stories. New York Times, for example, links to a 12-second audio that allegedly represents the sound waves of the explosion.

Now since gravitational waves, believed to be traveling with speed of light through space, are a form of radiation (unlike sound waves, which are mechanical and require a medium to propagate through) and supposedly distinct from other radiation (light spectrum, x-rays, microwaves etc). Their detection is tricky business—the device used to detect them being the interferometer which relies on incongruity of two identical light beams that ordinarily cancel each other out, except when the system is disturbed – aka shaken – by some force. This shaking by astronomical gravitational force is barely detectable since, theoretically speaking, the gravitational force fades out by the time it reaches earth.

In the current case the claimed shaking happened because of gravitational waves that made it to the detectors before dying out and was strong enough to shake the sensitive interferometer in order to affect the light beams’ harmony. But the problem is, is this claim verifiable?

First, is the audio really a conversion of the light beam pattern detected by the interferometers at the two LIGO stations? No offense, but “scientists” do lie and for good reason – money. Second, extensive double-checking – and again independently – would be required to make sure the gravitational force was celestial and not some earthly disturbance or system fluctuation.

Gorazd Velkovski wrote a blog that is worth reading and as we see, he sees little strength in the claim of gravitational waves’ detection. One question that pops up of course is why announcing now the detection that happened five months ago.

Is it the sound of two black holes colliding and merging, or Velkovski’s (your, mine, somebody’s) grandma dozing off? We’ll need to look for evidence and ask many questions before putting our belief in claims of detection of gravitational waves. Meanwhile, it’s important to remember that past claims of gravitational waves’ detection have been withdrawn after probing the actual origin of the signal.

One thought on “Claims of First-Ever Detection of Gravitational Waves”