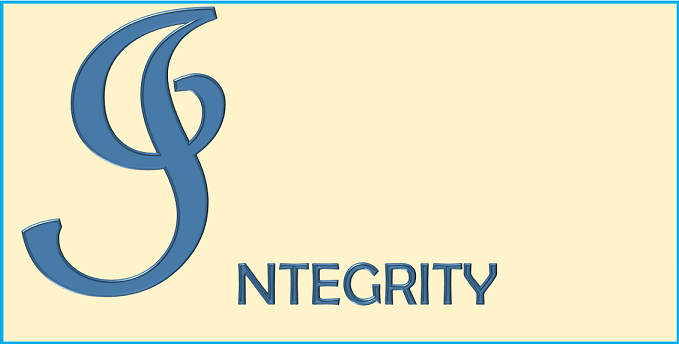 Recently, I attended a seminar at my college that was centered around the idea of integrity. I, from a personal standpoint, would have gone regardless because I received scholarship points just for being there. However, I was intrigued as to how one could have an hour-and-half long seminar around an abstract idea like ‘integrity’.

The seminar was presented by our local NSCS chapter president, her father, and two of her father’s co-workers. It began with an introductory conversation on the various definitions of integrity which I found enlightening. It then moved on to, and remained for the rest of the time, on the topic of integrity in the arts.

We began on the physical integrity of pieces of work. Interestingly enough, we didn’t start on famous pieces of art or even a famous novel. No, we started on the Declaration of Independence. We were briefed on the multitude of protecting agents that surround the Declaration at any given time, and then we were questioned as to why we, as a country, would go to such extremes to protect a document that can easily be copied and replicated. For the first time, I was faced with thinking about something that I had taken for granted and in stride for so long. “Why did we?”

Frankly, at first, I found myself in a profound state of indifference as an answer. I wouldn’t care if the original document was preserved for all of time or was crumpled up like end of term notes. But, then I took a second and realized that a second and deeper emotion was surfacing: Want. I had a yearning to see the Declaration of Independence and that couldn’t be done if it was destroyed. There were deeper meanings discussed, like the idea of tradition in America; but I still hold that at the very root of an idea like tradition, there is the foundation that “We are going to keep it like it is so that future generations can see it and learn from it.”

The next topic hit a little closer to home. The idea of artists protecting their work and also how they must maintain the integrity of their work. The first thing that came to mind was the obvious. copyright laws. These are easily one of the greatest achievements that modern society has come up with. The idea of intellectual property and all of its implications is overwhelming. Essentially, “I have an original idea and it is wholly mine and no one else can use it without my permission.” The amount of control that that gave us artists and inventors in this world is unparalleled in history.

The greatest thing that came out of this informal conversation styled seminar is that artists must stay true to their work. They cannot compromise themselves or their work for any reason. Outside pressure and inside pressure be damned, what an artist strives to say through whatever medium he or she chooses is sacred both to the artist themselves and, more importantly, the

society that that piece of art pertains to. It was said multiple times throughout the seminar that “Art has time and time again started controversial conversations about societies.” I believe that to be true. Some of the loudest statements that have ever been said in history weren’t said with spoken words. I think now of artists like the world famous and highly illusive Banksy. I think of novels like 1984, Brave New World, To Kill a Mockingbird. Think back to your high school years and the novels that they had you read and you’ll come up with your own list.

I have always been a proponent of the idea that if you have something to say that has even the slightest possibility of making at least one person stop in their lives and challenge some part of themselves then you have succeeded as an artist. Imagine if artists like Banksy or writers like Aldous Huxley would have compromised their ideals out of fear, doubt, or more likely an external pressure, saying “Don’t make waves.” Imagine the lack of questions that the world would have had to face if these artists would have compromised their integrity. Imagine what the world might be like if there weren’t those brave few who are willing to say things from a unique point of view, regardless of who disagrees with you.