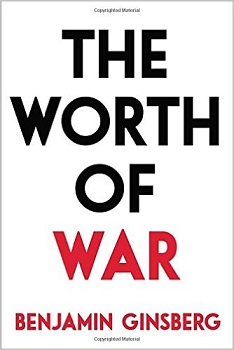 War is hell – we keep hearing this reaction to the word “war”, particularly from those who have witnessed the horrors of war first-hand. Yet, as Benjamin Ginsberg’s The Worth of War (Prometheus Books, 2014) explores, war is a much bigger phenomenon with more sides to it than death and destruction.

Ginsberg, a professor of political science at John Hopkins, explores war as “the most severe form of competition”. As the book’s referenced accounts from world and US history show, war mitigates “government brutality” and shakes people out of collective fantasy or irrational beliefs in myths – in other words, a myth-buster of massive proportion.

The author relates war to economic progress, technological advancement and dissemination of technology to civilians, and at the same time, a determinant of political power within a government. The latter has been explored in fair detail in later chapter of the book that analyzes the US government’s history with focus on laws, jurisdiction, and prerogatives relevant to specific officials and departments.

The Worth of War is a book with high educational value, and particularly so in an age of terrorism and war on terror. It takes us beyond the news and media portrayal of war and shows us what war really means as an agent of social and political transformation of societies.