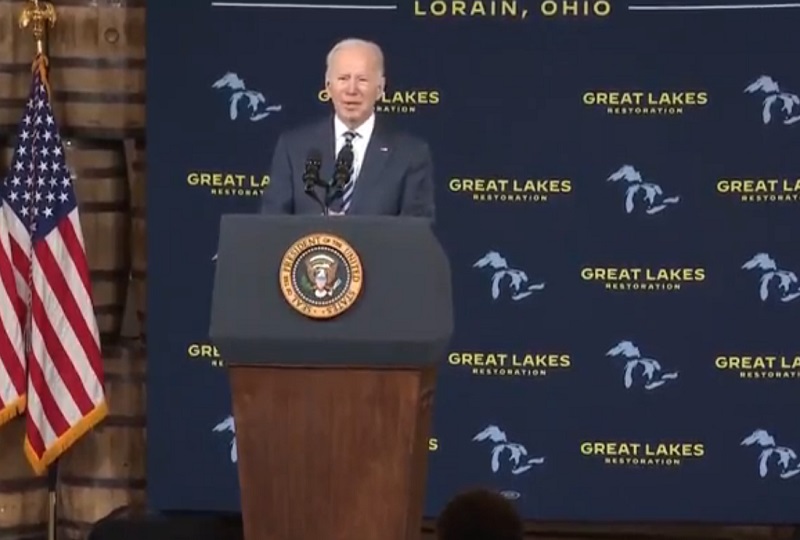 The Western Journal posted the video clip from Biden’s Thursday speech Lorain, Ohio, in which he started telling about his life and said he was once a lifeguard on Lake Oswego while remembering being a student at the Syracuse University in New York. He said in his familiar stammering speech:

I went to Syracuse University. I was a lifeguard on Lake Oswego. I — and I — and I know the Oswego River up in New York.

The news story wrote that there is an Oswego River in New York, but there is no Lake Oswego in the state.

The Gateway Pundit wrote that the only lake nearby Oswego River in New York is Lake Ontario.

What appears to have happened to Biden is that in his collapsing memory, he mixed up the swimming pool in Delaware, where he was once a lifeguard, with Lake Ontario near Oswego, imagining that he was a lifeguard on the lake. In fact, he was a lifeguard at a swimming pool in Winchester, DE, in 1962 as reported in The Daily Beast in a 2017 story. As a tribute to him, that pool was named after him, i.e. Joseph R. Biden Sr. Aquatic Center, in 2017.

Biden’s latest gaffe caught the attention of critics who have noticed his failing mental health since his presidential campaign days. Tommy Pigott was one of the Twitter users posting Biden’s clip and asking what he is talking about.

"At my old hangouts as well. I went to Syracuse University. I was a lifeguard on Lake Oswego and I know the Oswego River up in New York."

Not sure what lake he was a lifeguard on, but there is no Lake Oswego in New York (but to his credit, there is a river). pic.twitter.com/pC7VJXHMXu

In their political loyalty to the Democratic Party, the mainstream media networks and publications have blacked out on the story.