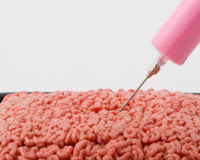 Here’s bit of more alarming news for red meat consumers as the infamous additive “pink slime” is said to be making a comeback in beef burgers.

In 2012, the fast food giant McDonald’s announced end to the use of pink slime in its beef burgers. The supplier of the beef treated with pink slime claimed that McDonald’s decision came as a result of the inability of lean beef supply by the supplier rather than concern over health issues.

A new petition on Care 2 asks the USDA to ban pink slime in the interest of public health. The petition page says that exposure to ammonia in pink slime can create a range of serious health problems among people including damage to liver and kidneys.

The petition has been signed by 3K plus people, and the count continues. The call for signing the petition underscores the need for placing human health above agricultural interest.