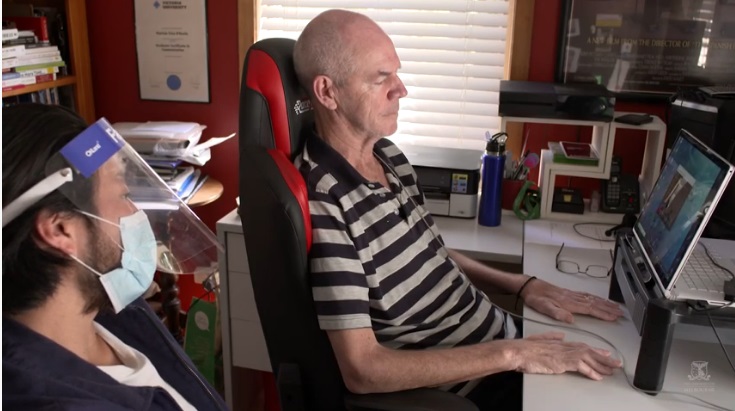 Scientists at the University of Melbourne, Australia, claim that they successfully connected a human brain to a Windows computer. The researchers say they made the connection by inserting electrodes into the jugular vein, Newsmax reported.

The study titled “Motor neuroprosthesis implanted with neurointerventional surgery improves capacity for activities of daily living tasks in severe paralysis: first in-human experience” was published in the Journal of Neurointerventional Surgery on October 28, 2020 with Thomas J Oxley of the University of Melbourne as the first author.

The two participants of the study are living with amyotrophic lateral sclerosis (Lou Gehrig’s disease). A new endovascular Stentrode BCI (brain–computer interface) was implanted in the superior sagittal sinus adjacent to primary motor cortex. The interface allowed their brain to control a computer’s mouse via wirelessly transmitted electrocorticography signal. Combined with an eye-tracker for cursor navigation, instead of a mouse, the participants were able to perform some “instrumental activities” on a Windows 10 operating system.

On their website, the University of Melbourne posted the video of one of the patients participating in the study. Philip O’Keefe, 60, is seen telling about how the brain–computer interface device, Stentrode, was implanted in his head and enabled him to operate a personal computer using his brain signal transmitted via the device.

“It’s about re-training your brain to operate in a different way,” says Philip. “It’s just concentration, but like riding a bike it becomes second nature.”

The story says that unlike other brain implants, which produce an immune response and cause scar tissue around the recording electrodes, Stentrod is safe.

Stentrod is biocompatible and becomes incorporated in the wall of the blood vessel and isn’t in direct contact with the brain, meaning it can keep operating permanently.

The researchers are now looking to conduct trials in the US and seek the approval of the Food and Drug Administration (FDA) in order to make the technology available to physicians there.