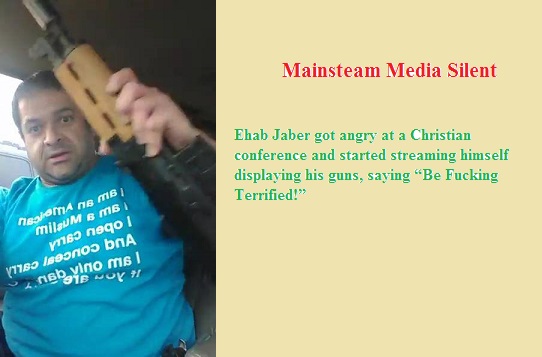 The corporate and political nature of leftist media mobs was once again exposed in the case of a Muslim man who lashed out at a Christian conference and streamed himself in a video showing his arms.

Only a handful of conservative sites and blogs in US discussed the incident which happened on April 9 at a Christian conference in Sioux Falls, SD. An armed Muslim man Ehab Jaber, 45, behaved suspiciously at the conference, videotaping the conference while entering there with a gun despite the fact that guns were not allowed at the facility.

As he was escorted out, he streamed himself live on Facebook inside his car, showing a number of guns and ammunition and angrily repeating “be scared”. Milo Yiannopoulos and others added the video on their websites.

Not surprisingly, the mainstream media observed a blackout on this incident, despite the clear terror threat. Ironically the leftist-run media mobs are hyperactive on gun control issues. But this silence on their part added to the strength of the general feeling among critics of media that mainstream is pro-Islamist. It’s easy to imagine the uproar in leftist propaganda a cartels had a Trump supporter or a conservative gun advocate done the same.

While initially reports of the incident said there were no charges the FBI/police would frame against Jaber, who is said to have originally come from Saudi Arabia, the latest report on KDLT tells he has been charged with one count of terror and can face up to 5 years in prison if convicted.