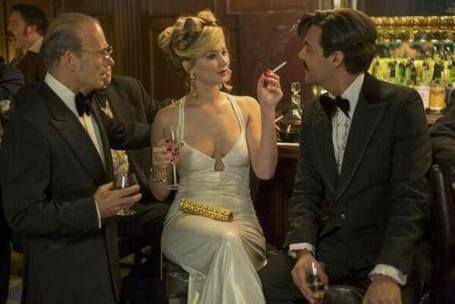 David O. Russell’s up-and-coming American Hustle continues to seduce news and views, and the publicity is really big. Well so are the names Christian Bale, Amy Adams, Bradley Cooper, and Jennifer Lawrence. I have with me one committed actor from the film, who lovingly goes about his work and makes a real tough guy on screen. Let’s welcome Gary Craig for a chat. But first, let’s take a look at the film’s official trailer.

Ernest: Gary, it’s nice to have you as a guest on Word Matters! Please tell us a bit about how you entered acting?

Gary: I always wanted to be an actor on the stage. Show business has always been in my blood. My grandfather Louis Anzelowitz owned a famous restaurant in New York called Moskowitz and Lupowitz.

When I was five, I remember standing on a stage with a live band, and singing. In my teens, I attended The American Academy of Dramatic Arts in New York. My uncle Hy Anzel was a working actor, and I thought I would use him as an example, and enter the business. He got me an audition for a Broadway show. I was to sing a selection at the audition, which didn’t go well. In fact, it was a disaster. That one event discouraged me to continue, and I went into radio instead, because performing comedy on the air with characters and dialects was still acting, but I would be in control.

I’ve had an amazing career in radio, but there was that gnawing feeling that I should have sucked it up and had a go at it. So about four years ago, I decided to go after it again. This time I wouldn’t have to worry about supporting myself because of my career. Since then, I’ve worked in feature films, and television.

Ernest: Tell us a bit about American Hustle and your character in the film, and you screen time?

Gary: I play a mobster named Jerry Catone. It’s hard to say how much screen time I will have because I’m not in control of that. I shot for 3 days up in Boston, in 2 scenes. One is a party scene in a hall where I escort Jennifer Lawrence’s character into the room. The other one is a bar scene that I have with Jennifer Lawrence, Bradley Cooper, Amy Adams, Christian Bale, and Jeremy Renner.

Ernest: Did you find it challenging to play a bad guy? What kind of experience it is playing a mobster?

Gary: When casting directors see me, they more often than not see a “tough guy”. Playing one is not a stretch, because if you talked to my coworkers on my radio show, they would probably tell you that I’m a real ball buster. But I’m known for comedy on the radio. I’ve been on the air since 1981. But casting directors either don’t know about that or see it. You’re always cast from your picture, it’s the first thing they look at… if you fit “type” or not.

Ernest: Personally, do you like watching films with lots of violence or are you more a fan of more quiet films?

Gary: I’m a fan of GOOD movies. Movies that make you laugh, or cry, or think. For me, films everyone should see at least once in their lifetime include: Scarface, Goodfellas, Godfather 1 and 2 (3rd one sucked), Falling down, Defending your life, Wizard of Oz, Holiday Inn, White Xmas, It’s a Wonderful Life, Gone with the Wind, Back to the Future (1 and 2). I could go on, but these are the films that I would have to stop and watch if I were cruising thru the channels and saw one.

Ernest: What kind of character do you aspire to play in future?

Gary: Any role that grows me as a performer, or challenges me to be better.

Ernest: And what projects are you into after this film?

Gary: I’m constantly auditioning.  Not in a project right now, but I continue to produce my internet series The Crazyman Show at www.crazymantv.com. I AM The Crazyman. It’s based on a character I created some years ago.

Ernest: Gary thank you so much for taking time for this chat about your work.