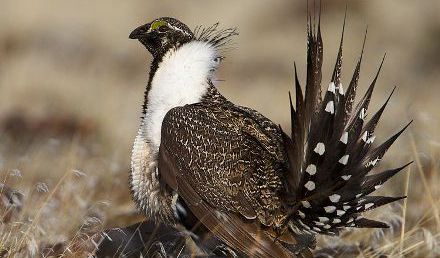 The Defenders of Wildlife (DOW) is urging the Bureau of Land Management (BLM) and the Forest Service via their online petition to take stronger measures for conservation of the sage grouse, which in their words is among America’s “most iconic” birds.

The petition page names various factors responsible for threatening the population of sage grouse including: oil and gas drilling, mining, livestock grazing, and off road vehicle use.

In Canada too, the bird is critically endangered. According to a story in The Huffington Post, the population of greater sage-grouse has gone down by 98 percent in the past three decades in the provinces of Alberta and Saskatchewan. A ranch south of Calgary is now set to host a breeding and rearing program for conserving greater sage-grouse as the Canadian government issued an emergency order in December for its protection.

In December last year, Aljazeera America ran a story about concerns from oil industry backers over the impact of the decision to  place the bird on endangered species list, especially on Colorado where oil and gas industry amounts to the region’s economic lifeline.