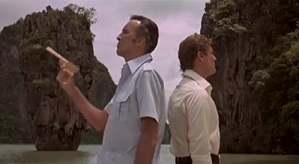 Living in Thailand, I recently went to see Khao Phing Kan – also popularly called the James Bond Island, or as I say, the Roger More Island, because it was featured in the James Bond movie The Man with the Golden Gun (1974) with Moore playing Bond. And it brings back the memories of my meeting Roger Moore.

Yes. One day, a short man in his smart attire (jacket, shirt, tie) came to my parents’ restaurant in Brighton, England (UK). He said he was my uncle and asked me if he could speak with mother. As it turned out, he was the brother to my mother living in Australia. He was working as chief of props/lighting for Metro-Goldwyn-Mayer. The film he was working with was Sir Richard Attenborough first directed movie, Oh! What a Lovely War (1969). He got me, my mother and my best friend work as extras. Sir Michael called me and hundreds of other by our first names. Six months I worked on the film. I was later invited to work on The Virgin Soldiers in Singapore. I was only 17 and hitchhiked to Africa instead.

Over a year later, I returned to London and saw they were showing the premier. The red carpet was laid as famous actors walked with their wives in dazzling attire. I with my Jeans and leather jacket walked inside and went to the box office to see if I too could see the premier. They turned me away of course. Suddenly, I heard my name called out, and I knew the voice only too well—none other than Sir Michael. He looked at me and smiled. Exchanging some quick talk, he called his nanny looking after his children and asked her to take care of me. I stood proudly at the back of the cinema. The nanny smiled when she saw my big part (“Cocco?” a soldier asked. “Thanks,” I said, wrapped up in blanket, pretending it was winter on a hot summer day).

After the show outside Sir Michael asked me my thoughts about the film. Other distinguishing film stars began to gather. One was Roger More. I could not go with them to the dinner party dressed in jeans so Michael asked Roger to see me home. We sat on the train in a first class compartment. He never said one word; it was a little intimidating. I thanked him and went home. My parents were so happy to see me. I was gone a year and a half. The second time I met Roger was in Norway at my home. But you don’t want to hear about that do you?

Living in Bergen, Norway, I stumbled upon an old cellar, it turned out to be a wine cellar from the 14 century. It took me one-year sucking dust before I got the director of archeology of Bergen involved, Siri Myrvoll, who later became Cultural Heritage Management Officer.

I teamed up with others and later the company received the cultural award in Hordaland Bergen. I lived not so far away from the business, and my neighbor living underneath me liked a discussion on wines. At that time, I had 99 different wines from all over the world on glass. My neighbor was studying law. It was Christmas, and as we got chatting over a glass of wine, he told me a secret: his mother was a Swedish woman and married Roger Moore, and he was waiting for him to arrive. I had to go to work so it was hello and good-bye.

Author Victor Paul Scerri, born in London retired document control engineer, entrepreneur, received the Norwegian Cultural Award for his efforts in restoring a 14th-Century wine cellar. He studied at the Medway Collage of Art, where he achieved second place in a prestigious, award-winning oil painting competition in Great Britain. His first works as a writer and artist were published by Recovering the Self: A Journal of Hope and Healing. In recognition of his art exhibits, a Zen painting is the cover image for the April 2011 issue of the journal. He continues to publish articles at EnzineArticles.com/, In addition, he has been an active team writer of short stories. You can follow his work via http://nicewriters.com.

One thought on “When I Met Roger Moore”