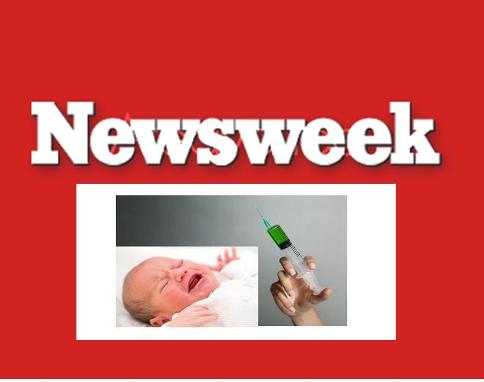 Times promotes vaccines via ads and biased reporting, but Newsweek is more powerful; it damages your brain when vaccines don’t – it makes you a dummy. After slapping this intro in the face of Newsweek fans, I’ll now talk about how Newsweek is so “dummyfying”.

In a recent edition, Newsweek tossed a Quora Question: If measles only afflicts the un-vaccinated, why do the vaccinated care? And the answer they picked from Quora expanded over a hypothetical case of a person who is unvaccinated and comes down with a supposedly vaccine-preventable disease. His healthcare costs, by this interesting example, quickly reach about 60 thousand dollars.

Leaping to further hypothetical stats, the story makes readers (dummies?) worried by assuming 100 cases like the one base case and calculating the costs at 6 million dollars, and adding again “virtually all of which could have been avoided.” The story thus tries to make the point that vaccination is good because the prevailing healthcare system works by making the collective pay for the individual. Makes sense? Of course – but only to the dummies!

So what’s missing in this narrative? Well, above all a thinking brain. In nitty-gritty, the story goes blind on the causality in disease outbreaks. Until you prove scientifically that an outbreak was caused by an unvaccinated person – meaning the first person who spread the disease was unvaccinated and he/she personally didn’t catch it from a vaccinated person – the entire argument built to promote vaccine fails at once. The fact that vaccinated patients can and do spread the infection is documented, though not much talked about in mainstream media because… well, need I say it?

But then we have stats proving that injuries caused by vaccines are costing the government loss that towers over the hypothetical stats of Newsweek Quora story. The federal courts hearing cases of claims to compensation to people injured by vaccines usually award millions of dollars in a single case of permanent vaccine-caused injury, which most of the times is brain injury. Despite every effort made to make vaccines look safe, millions of taxpayer’s money goes into compensating those whose lives are permanently destroyed by vaccines. Last year, one flu shot victim was compensated with over 11 million dollars. And this is the tip of the iceberg! The long-term, more subtle health damages of vaccines also cost money.

So who’s actually flushing taxpayers’ money down the medical drain? For one, Newsweek and its “Quora Quora Quora” style of journalism is the most immediate threat to brain health and safety. It creates and sustains dummies, which cost incalculable amounts of tax money in healthcare, although it’s invaluable to the profits of the vaccine industry and other corporate mafias sucking people dry of their bucks.