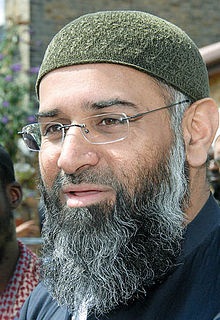 At last Britain has convicted and locked up its notorious radical Islamist preacher Anjem Choudary —something way overdue.

While he awaits sentencing, Choudary’s jailing has reinforced the hope that Britain is still awake and watching its back against terror networks that rely on people like Choudary who had been calling for “jihad” on the west and had pledged allegiance to ISIS. He had been recruiting young Muslims to make Islamic patrol teams that harassed non-Muslims on streets of London, but getting away with it, though he had been arrested before.

Choudary had openly declared US and UK as the real terrorists while not uttering a word about the Arab world, particularly Saud Arabia, for their partnership in financing and promoting terror. He had said he wanted every British woman, including the queen, to be clad in Islamic outfit.

Well Choudary can now dream of Shariah law in Britain inside his prison cell. But his arrest has sent a message of fighting back against radical Islam to other countries. In a First Post Op-Ed, Ghulam Rasool Dehlvi has pointed to the need for following the example of Britain in curbing radicalization and terror-nurturing by cracking down on similar figures and publications.