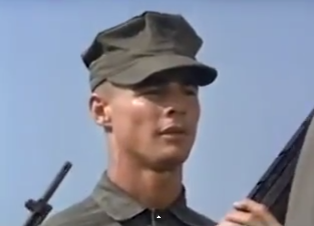 One of Jan Michael Vincent’s early films, this TV movie by Joseph Sargent is a very interesting and well-filmed drama about the issue of conscription. Jan plays a young man named Adrian, who, after being drafted in the US Marines for the Vietnam War, keeps meditating around the image of running free in peace. His peace-loving starts getting contagious and soon those in charge of the unit sense the need for “disciplining” him.

The gradual building up of conflict between the main characters and realism are the strongest features of this film which has a very solid and focused plot. Multiple elements of symbolism showing the theme of loss of freedom – Jan’s expression during his head-shaving, sketching a bird, and images of running in the green with his girl – add to the substance of the drama. The question whether the hero will choose patriotism or peace stays with the audience until the very end. And for some at least (me included), there are quite a few funny moments (imagine those mechanical “Sir Yes Sir!” repetitions shouted until the Sir “hears” it).

Tribes captures the essence of what it means to make a choice between freedom and forced, military patriotism. Jan’s acting is matchless, his figure fitting so neatly in his role. The choice before him is one of the fundamentals of activism – breaking bad laws to bring about peace. And even more so in our times though it’s more about other bad laws than draft.

The Wiki page for the Tribes tells that the film received Emmy Awards and was a big hit upon its release back then. As of now, the film is on YouTube and at least a few sites seem to have it on DVD.