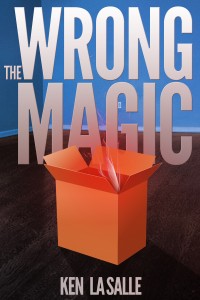 Good relationships take a certain kind of magic to succeed. Sadly, all Alex Petroya seems to have is the wrong magic.

After his wife Stephanie leaves, Alex has one place left to go: the pink house his parents left to him in Cambria, California. After moving in, he discovers a box filled with unfinished stories Stephanie had written during their marriage.

Could finishing them win her back? Alex decides to try but finds writing is harder than it looks. With help from his brother-in-law, Conner, he learns a simple incantation to increase focus. As Alex writes the stories, they come true, creating strange, unnatural events. Then he gets another idea: he will manipulate the stories further to make Stephanie return to him.

With the incantation and the stories, Alex seems to have tapped into a magical combination. But in the end, he finds there is no magic stronger than that of the human heart.

You can pre-order The Wrong Magic in paperback directly from WiDo Publishing for the special price of $12.70 by going to http://widopublishing.com/the-wrong-magic-by-ken-la-salle/. The Wrong Magic will be available for wide release on December 12, 2014 in both ebook and paperback editions.

Look for more work from Ken La Salle at www.kenlasalle.com