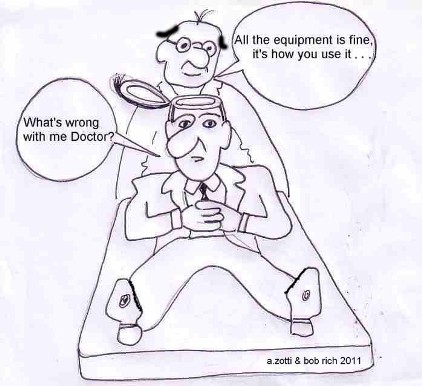 1. A lady was referred to me by her psychiatrist. She has a lifetime history of depression, anxiety, panic attacks. The psychiatrist had started her on the road toward recovery, by weaning her off many years of antidepressant medication. He told her, she needed therapy instead, and that it was up to her whether she would benefit from it.

Given the long history of suffering, going back to a dismissive, judgmental mother, I expected that the measly 10 sessions Medicare now funds in Australia would be insufficient. To everyone’s surprise, she felt able to go it alone after our fifth session.

She knows her life hasn’t been “solved.” She has lots of work to do, but the point is she now has the confidence that she can do it, for the rest of her life. Now, she is not just “normal,” but better than most because she is in charge of her own destiny.

The therapy we did was all evidence-based, nothing remarkable. What was remarkable, what led to her achievement, was a simple decision. When the psychiatrist told her it was up to her whether she would benefit, she changed her life by taking his words on board.

You can do the same with your problems.

2. A middle-aged man with a lifetime of achievements married a much younger woman, and that was when his troubles started. I won’t go into what those troubles were, but they were substantial. He was sticking in there, because the light of his life was their six-year-old little son.

As I do with all new clients, I sent him my “starting kit” before the first session. He read it, and he instantly clicked with my page how to solve a problem, any problem. His particular expertise is risk management for large companies, and he recognized my problem-solving tools as part of what he has done for decades. All he needed to do was to apply his professional skills at home.

He came into the first session telling me that I’d already set his life onto a better track. I also discussed mindfulness and acceptance as a way of coping better. Again, having worked many years in eastern countries, this was nothing new to him – he merely needed to apply his knowledge to his everyday life.

So, basically, one session was all he needed.

You also have lots of skills, wisdom, and knowledge relevant to your problems. Like this man, you can apply them.

3. In contrast, last year, a lady was referred with a driving phobia, and other severe anxiety problems. We had 13 sessions, at the end of which her problems had substantially eased, but were still there. She has now contacted me with a new referral, having relapsed back to where she’d been before therapy.

I think the reason is that, from childhood on, she learned that she was helpless. All her life, she has looked to others to rescue her. While I was a regular presence in her life, she could advance. Six months without me, and she slipped back into the old pattern, and again feels that she needs rescuing.

She doesn’t. She needs to take charge of her own destiny: “face it!”

Dr Bob Rich is an Australian psychologist about to retire – a storyteller with 15 published books including 4 award-winners, a professional grandfather, and a lot of other things that are none of your business. His latest novel Ascending Spiral has been getting rave reviews, and you are advised not to start on it unless you have the time to keep reading.

5 thoughts on “The Secret of Brief Therapy”