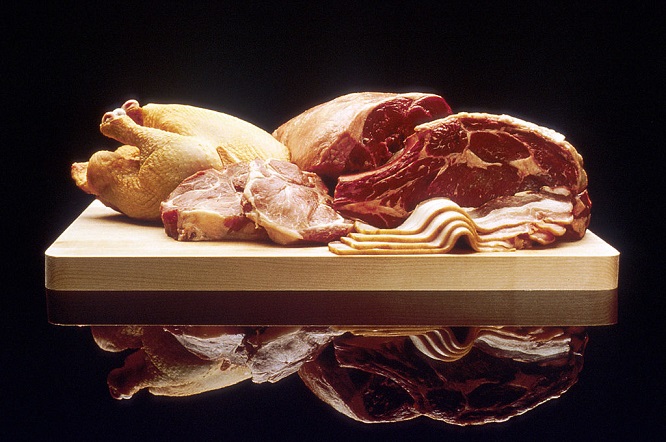 Many scientific studies show that people who consume meat are at greater risk of getting cancer than those who reduced their meat consumption, or avoided meat altogether. For example, Researchers at Harvard University found that meat-eaters are three times more likely to get colon cancer than vegetarians. There are a number of factors that doctors and medical researchers take into consideration to determine the risk of cancer among meat-eaters.

First of all, meat has no fiber and it lacks other nutrients that protect the body from cancer cells. Many meat products have animal protein and saturated fat, which clogs the arteries, causing heart disease and certain types of cancer. Some meat products have compounds such as heterocyclic amines (HCA) and polycyclic aromatic hydrocarbons (PAH), which are formed while meat is cooked at high temperatures. These compounds are believed to increase cancer risk. The high amounts of saturated fat in meat and other animal products, increases hormone production, which in turn, increases the risk of breast cancer in women and prostate cancer in men.

Now the question is: what can we do to lower the risk of cancer?

There are several things you and I can do to lower the risk of cancer in our bodies and improve our overall health. According to the American Cancer Society, research shows that more than two thirds of adults and over one third of children, living in the US Are either overweight, or obese, which puts them at greater risk of having cancer. By taking the following steps to improve your overall health, you will greatly reduce your risk of getting cancer:

Take time to savor your meals, but eat smaller portions.

Use skim milk, or (one percent) low-fat milk as a substitute for whole milk, and drink plenty of water instead of carbonated and sugary drinks.

My final piece of advice, talk to your doctor, before making any drastic changes in your health care. He or she can give you advice on what steps to take to reduce your risk of cancer and other harmful diseases that are specific to your individual needs.