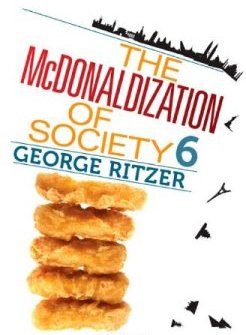 The 6th edition of George Ritzer’s The McDonaldization of Society (SAGE Publications, 2010) critically examines the fast 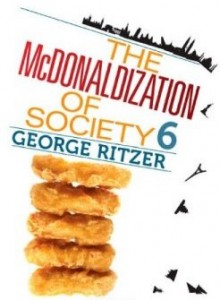 food model of social life in modern urban societies. Taking the United States as the prime example of an increasingly McDonaldized society over the decades, Ritzer discusses the evolution of a number of key social institutions along the lines of the fast food restaurants – hence the name “McDonaldization”, after the fast food giant that has expansively established itself in US and is also growing steadily abroad.

The book discusses four core principles of McDonaldization: efficiency, predictability, calculability, and control. Each one is discussed separately as well as in relation to social structure and social relations. Ritzer illustrates how an overemphasis on these principles is leading to deterioration of our status and values as humans, increasingly being mechanized by the McDonaldization model whether in feeding, education, health, or a number of other areas in our daily life.

Perhaps the most revealing aspect of the Ritzer’s book is showing the self-defeating nature of the McDonaldization process, or what he terms as “irrationality of rationality”. His examples from various social institutions explain to readers how standardized procedures characteristic of a McDonaldized system work against it such that efficiency turns into inefficiency, predictability gives way to uncertainty, and so on.

This book has a good deal for the reader to digest including a few examples of potentially DeMcDonaldized systems or those that have not been completely taken over by the McDonaldization principles.

This edition of The McDonaldization of Society is a good read for any serious readers and particularly for those studying social institutions, modern societies, or more recent history of the American society.