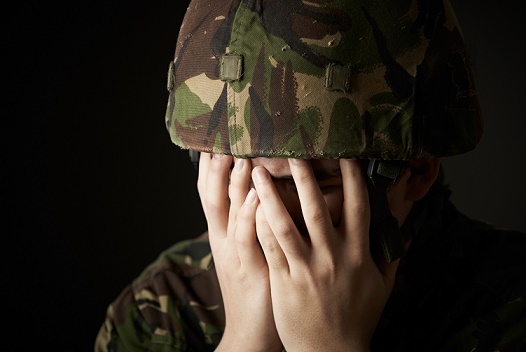 I, like many other veterans coming home from foreign shores have these invisible wounds. These wounds are a mix of anger frustration, depression, anxiety, isolation, suicidal-ideation, or homicidal rage, sleep deprivation, nightmares, substance abuse, and overeating, to name just a few. The help we receive at home has been greatly improved since the Vietnam War, though it will never be enough.

PTSD has long been related to abused woman, children, survivors of natural disasters, and combat veterans. More recently, non-combat related PTSD has been added to the list. However, the outside world doesn’t recognize this as a real war wound any more than depression is considered a real disease by some.

One of my first experiences with the lack of understanding of PTSD came from my wife. She couldn’t wrap her mind around what had happened to me, almost to the point of splitting up. In her mind, I had died over there. When I left home, I had been outgoing, laughing, smiling, loving life. After my return from Iraq, I sat in the basement in the dark, playing on my laptop. No matter what the day was like—sunny and beautiful, or cold and gloomy—I hid. After much arguing, I decided to go out alone. I stopped to get a bottle of water at a 7-Eleven; I was so terrified I went straight back home to the dark. It was another two months before I left the house again. I applied for a night job so there weren’t many people. I became a workaholic, just to try and keep my mind off what was going on in my head.

Through a lot of work with the VA that included couples counseling (which saved us) my wife became more aware of what I was going through; previously she didn’t know how to deal with it. She now knows my triggers and is very good at heading them or me off before something happens. My mother-in-law is old school. At one point during a conversation about doing something I was not at all comfortable with, she asked, “Why don’t you just get over it?” I nearly fell over in tears; there wasn’t any point in explaining it to her; I knew that she wouldn’t understand.

Of the many things I tried to work through, I think the world is a very dangerous place, my doctor taught me to rank these thoughts by giving them a percentage of rationality. As in what percent did I think I could be trapped on the local commuter train? If I said 80%, I had to break it down as to why or why not that was really rational, then try and make a reformed decision.

Going to school has been the hardest challenge yet. In college you meet people from all ages and walks of life—grandparents in their 70s, kids fresh out of high school, and the multi-diverse nationalities. Never seems to amaze me is that the foreign students understand me and what I stand for better than the American students.

More than once, I have been set off, emotionally triggered by a conversation, reading, or an opposing point of view. I have left class crying, shaking, not being able to breathe. I have even had teachers say that I need to just get over it.

As the US military continues to downsize as well as to fight wars we should have not been part of, PTSD—the invisible wound—needs much more support, whether on campuses or in the average world.