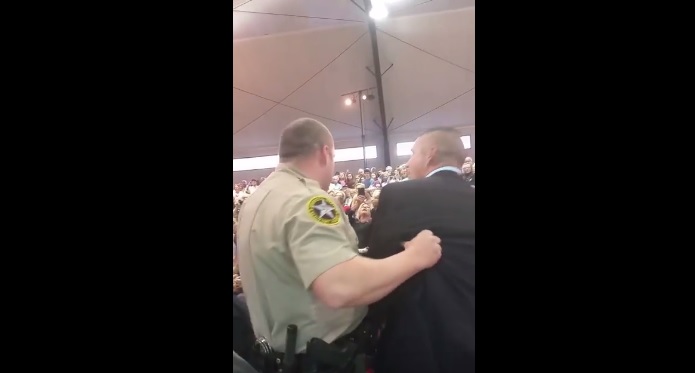 A video of a Clinton campaign rally in South Carolina showing a marine being removed by security has gone viral on YouTube.

The video titled “Marine Sgt. talks Benghazi Four At Bill Clinton rally for Hillary 2016” was posted to YouTube on February 26. It shows a former Marine Seargent questioning former President Bill Clinton at a campaign rally for his wife Hillary Clinton who is one of the two Democrat presidential candidates for 2016.

The veteran asks Bill Clinton whether or not his wife lied about Benghazi, referring to the infamous killings of Americans in Benghazi, Libya in 2012 for which Hillary Clinton is under investigation. As the marine gets persistent in his question, security is seen leading hi out.

At that point, a woman who is taping the scene starts speaking and asks Bill Clinton whether Hillary lied. As Clinton tries to answer her, she repeatedly says that Hillary lied over four coffins. She is then led away by security out of the hall. The video shows audiences unhappy at the disturbing question of the marine and the woman and they try to shout them down.

The video stats show that it got well over 2 million views in just 3 days. And as happens with popular videos, hundreds of comments have been posted on the video page.