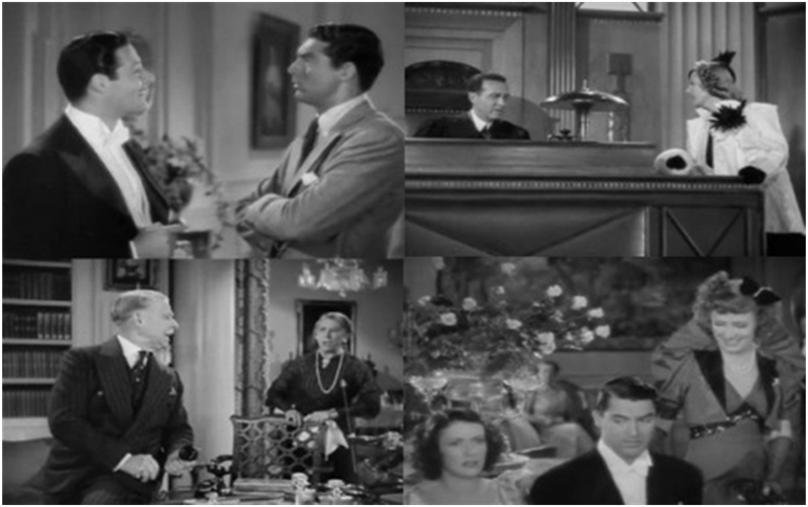 The screwball comedy The Awful Truth (1937) by Leo McCarey is essentially presented in an argumentative mood that prevails from the beginning to the end. The film’s events almost entirely take place indoors with plenty of two-shots and three-shots – showing characters engaged in argument and point-scoring (Figure 1).

Characters exchange quick, often snappy remarks without much gap for a breath in between a dialogue. Much of what is being felt but not said verbally is conveyed through expressions of characters in close shots. There are many moving shots, the camera following the characters’ movements, especially that of the two lead characters – Jerry and Lucy (played by Cary Grant and Irene Dunne), the couple in the process of divorcing. There isn’t much of tight-framing except in a few shots, for example the one in which Jerry is shown hidden behind the door by Lucy while she is dealing with Leeson’s “episode” of romance.

The director also makes use of the printed word and close-ups of non-human figures to convey the implied information (Figure 2). The Awful Truth follows a linear sequence of events in chronological order with successive scenes built up on preceding ones.

In sum, The Awful Truth is a visually presented argument on the topic of a troubled marriage in urban societies, without involving much of the sophistication in style that characterizes films of later periods.

The dog Mr. Smith, or Smitty, has a major symbolic importance in the film. He represents the truth about the marriage – the conflict that exists between the two lead characters. Mr. Smith is present is all the scenes where there is open conflict or argument between/about the married couple (Jerry and Lucy). He is shown dragged from the living room where Jerry and Lucy start arguing for the first time and thus audiences are shown that the truth is being removed from the scene; the characters not ready to face the fact that they have conflicting personalities and need to work it out.

Smitty is shown trying to reveal the truth at a few other times in the film. For example, when Duvalle is visiting Lucy and is hidden in the bathroom upon the arrival of Jerry, Smitty digs out Duvalle’s hat and brings it to Lucy, who is engaged in an effort to not let Jerry see it (Figure 3).

It is interesting to see that in the final sequence, when Jerry and Lucy go to bed but cannot sleep out of passion for each other, a black cat is shown lying in Lucy’s bed. The symbolic significance of a black cat, usually standing for trouble or the power of witchcraft makes sense here, predicting the overtake of passion rather than reason, so that the cycle of lies and deception will continue without a lasting resolution. That happens soon as both characters play the reconciliation game and let the night’s dark hide the barrier of conflict between them.

I think Jerry is the character who has the most to learn in this film. He is shown as the haughty, self-assured husband who thinks he can easily spoil his wife’s comfort and remain independent. However, as the film proceeds, we learn that his estimation of Lucy is radically mistaken. Acting as his sister, Lucy pays him back in his own coin while he is in company of the woman he is pursuing and her family. Jerry thinks himself of being the one who is always in control of the situation; yet in the final sequence of the film, he is shown more impatient to get into Lucy’s room while she stays put, knowing he won’t be able to control himself. And by making him come to her, we learn that Jerry still has to learn a lot about the importance of his wife in his life.

So what’s the “awful truth” in this movie that we get to see by the end. I feel the “awful truth” presented is that the two characters, making the typical urban married couple, have conflicting personalities that complement each other in a game of lies and deception that will continue because they are emotionally dependent on each other but lack the trust that makes marriage a satisfactory relationship. Both characters know they are lying and have a good deal of knowledge of the other’s lying side as well; yet they are reluctant to resolve the issue and instead are constantly engaged in playing games to outsmart one another.