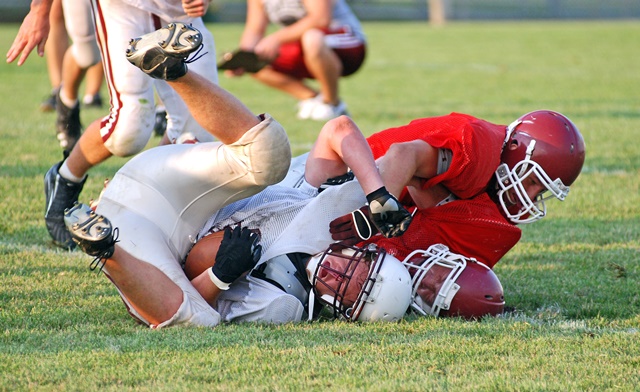 I recently learned that Massachusetts legislators are proposing a bill that will eliminate organized tackle football from children in seventh grade or lower. These legislators believe that football-related concussions originate in Pop Warner and other youth leagues. I don’t know if this is true; however, this is a subject for debate.

While Government wants to go out of its way to protect future generations of kids from playing tackle football, isn’t Government’s decision taking more responsibilities away from parents? By definition, parents are supposed to make the right judgments as to what they think their children should do, including youth sports. Who knows? Perhaps parents will not allow their kids to play tackle football, but that would be their choice. On the other hand, I understand what Government is doing if it’s proven that football injuries at a young age affect children as they get older.

Nobody wants a child to grow up with side effects from football injuries. The National Football League is trying to adopt new rules which will hopefully avoid concussions, so I guess Government is on board with the NFL. The brains of young children are not yet fully developed, so we must take as much precaution as possible.

This debate revolves around whether parents should have a say in what their children should do. Patrick Gilroy, a sports talk host on Radio Station WEEI, is totally against what our Government wants to do, believing that it’s up to the parents. He also blasted his co-worker Alex Reimer, not only because Reimer supports this new legislation, but because Reimer, who is not a father, is trying to tell parents what’s right and wrong.

Like many other people, Gilroy is concerned about children who are not allowed to be kids anymore, and that they are not exposed to as much harsh reality as kids in previous generations were. He thinks that if children go without facing some harsh realities, they won’t be well-rounded people. For example, society is now allowing children to win for losing, because they receive participation trophies in organized sports no matter how well they perform.

Gilroy has a 12-year-old daughter who twirls a baton. He told us that on two occasions, the baton hit her in the face, once in the eye and once in the mouth. As Gilroy put it, it’s one of the hazards of being a baton twirler. She did get a black eye and had to have her teeth fixed. Was she upset about her looks? Sure! How many young girls don’t care how they look?

The point is that she was raised to understand her responsibilities, knowing that on occasion something unpleasant may happen. It’s part of growing up. We should all try to do our best to avoid bad stuff, but sometimes it can’t be avoided. Now, should Government ban baton twirling? Should Government also ban cheerleading because a cheerleader once fell off a pyramid during a routine?

Every one of us should try our best to protect ourselves and others. I’m in favor of that. In the meantime, I hope that if Government wants to protect young children from playing tackle football because they might get hurt, it should also ban abortion which does a lot more than injure a very young life.