Laura Linney rocks in courtroom dramas, as Primal Fear fans would remember. In the horror/drama The Exorcism of Emily Rose (2005), Linney once again possesses her viewers in several courtroom scenes. 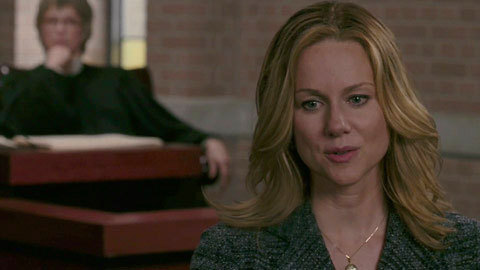 The film, which is based on a real-life exorcism case in Germany in 1976, shows the trial of a priest, Father Richard Moore (Tom Wilkinson), who has been accused of negligent homicide for performing exorcism on a girl he and the girl’s family believe to be possessed by demons. Erin Bruner (Linney) experiences some strange, alarming things as she defends Father Moore in the court. But the main conflict of science versus supernatural, believable and doubtful provides the major element of interest. Was Emily possessed or psychotic? Did father Moore help Emily or cause her death?

This scene is the concluding statement of Erin Bruner before the jury. Laura Linney’s tone perfectly expresses her character’s emotion and an epitome. She offers a balanced and reasonable position on an otherwise tightly guarded territory under the general rubric of science. The perfect voice for the most important question.

The scene that I actually wanted to share from the film is in the earlier court scenes where a psychiatrist Dr. Briggs is examined by the prosecution and the defense. When the doctor mentions a certain “Psychotic Epileptic Disorder”, Bruner questions the status of the concept as a standard medical condition. The doctor has to admit that he “distinguished” and rephrased it – i.e., made it up.

It’s a wonderful hint in the film about the actual self-made and self-serving concepts, including wholesale disorders, mainstream psychiatry has been found to do off and on (or some would say, constantly). The scene is there on a Facebook video of the whole film. Don’t miss it – for it’s Laura Linney once again at her best!
Laura Linney as