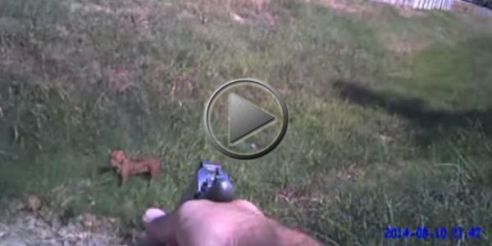 Yet another case of the horror of trigger-happy cops has made headlines across the world – this one’s from Cleburne, Texas. The police officer in question shot a 6-month-old pit bull puppy dead while his body camera recorded the incident.

Daily Mail published the story of the pit bull killed by Officer Kevin Dupre while the video recorded by his camera shows that the dog was wagging its tail and was called by the policeman toward himself with kissing voices.

The paper’s story is quote the familiar old story: owner of the dog devastated, community unhappy about how the officer handled the situation, and the police of course making justification for the killing and saying the video is not representative of the situation.

Meanwhile, Donna Earley’s petition on Care2 asks for justice for the dog. The petition informs that the incident, which happened in August this year, calls for the termination of Kevin Dupre. Also, the petition says that the officer had a female dog, Cocoa, on target but she was lucky to survive as Animal Control called the officer and stopped him from further shooting.

Such killings have become common now in America – and it has been more often than not when irresponsible, aggressive cops gun down harmless and quite friendly dogs because these cops have the very familiar excuse of “aggressive dog approaching them” and they easily get away with such situations because their department or the judicial system sides with them. Even recorded evidence is rejected as “not representative” of the situation.

While Donna Earley’s petition calls for termination of the officer, I definitely would ask for more. I would like to see such killers behind the bars. Why we do have to put up with the disgusting hypocrisy of grater punishment and serious action when a human is killed but removal from job at best (and even that doesn’t happen usually) when an innocent pet or stray is killed with videotaped evidence of the killing?