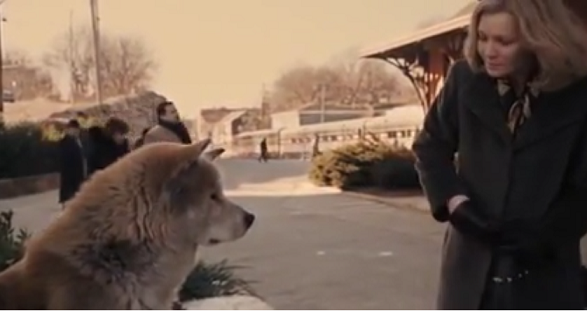 Hachi: A Dog’s Tale (2009) is based on the true story of a dog Hachiko – an Akita in Japan – who was adopted by a teacher and bonded with him as his most loyal friend. Every day he left his owner at the train station and waited for him at the same spot to return home.

In this adaptation of Hachiko’s story, Richard Gere plays the professor who somewhat hesitantly adopts the homeless pup Hachi and becomes his best friend. One day, the professor dies of a heart attack at his institution. He never steps out of train again, but the loyal Hachi will wait at the same spot for the rest of his life to welcome his owner back.

Unequivocally a tear-jerker, this scene near the ending of the film shows the professor’s wife (played by Joan Allen) visiting the city again and finding an aging Hachi still waiting in front of the train stop.