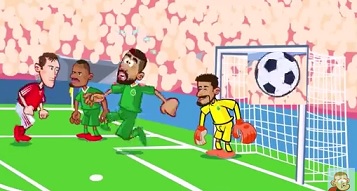 It is apparent that the Saudi kingdom treats its citizens as slaves, and they are showing it yet again as the kingdom is set to punish some of its soccer team players after a humiliating defeat in the World Soccer Cup’s opening match against Russia.

The Saudi team lost to championship’s host Russia 5 – 0 on Thursday. Daily Mail writes that the Saudi team was widely called “one of the worst to ever perform at the World Cup finals” following the defeat against Russia. And the Saudi football federation is mad at the team now.

The federation’s chief Adel Ezzat was cited telling that the several players of the team will face a penalty, including the team’s goalkeeper Abdullah Al-Mayouf. It was not specified what kind of penalty the players will face. But we do know that Saudi regime, like medieval kingdoms, can get harsh and torturous on those who are subjected to their royalty.

What’s worse, they face two games ahead against teams considered tougher than Russia. So likely, greater humiliation ahead!

One could just hope these players escape any physical brutality imposed on them. Along with this, it’s probably not so baseless to wonder whether the Saudi wrath over the defeat and intention to punish its players is, at least in part, a consequence of the Iranian team’s victory in their opening match against Morocco on Friday. It is common knowledge that any achievement for Iran – in sports or other spheres – means bitter jealousy and anger for the Saudi regime.