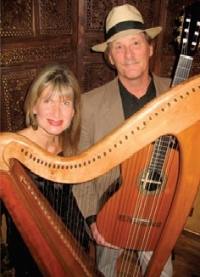 Christine is one of the area’s most popular folk harpists & has performed for many years in concerts & special engagements throughout the West Coast. Christine’s debut album Sand Castles attained a number 1 ranking on the “Americana” charts at KVMR radio. Her musical style includes a wonderful blend of Celtic, Latin, Classical, & Jazz.

Rob, a long time Sierra foothills musician, is well known for his work with The South Loomis Quickstep, a Bluegrass band that toured all over the country & in Europe. Rob has released a new compact disc, Violet’s Old Guitar, a Musical Journey, a retrospective look at his career that has spanned over forty years.

Christine & Rob will be joined by their friend & world renowned multi-instrumentalist, Joe Craven, on violin, mandolin, & percussion. Joe has kept impressive musical company over the years, as a former member of the David Grisman Quintet. Joe also performed with Jerry Garcia, Stephane Grappelli, Bonnie Raitt, Darol Anger, & many others. The trio will be joined by two very special guests & dear friends: guitarist / songwriter Bill Edwards, who over the years has worked with many bands including The South Loomis Quickstep, Way Out West, & currently with Webster, Walton, & Edwards. Also joining on the bass will be Brett Cole. Brett is well known for his work with the Pyronauts, a very popular “surf” band from the Auburn area; he is also a veteran of numerous jazz & classical ensembles, & is currently working with the Bob Woods trio as well.