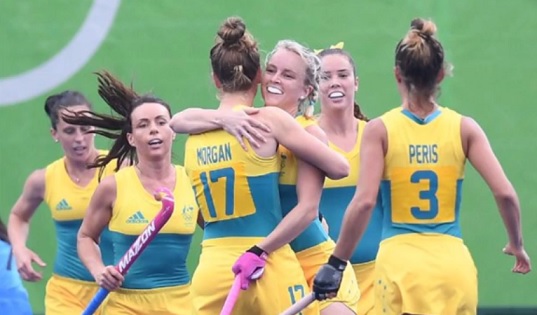 Throughout the game, Australia was in attack mode and India on defense. Indian players also continued to commit fouls, leading to several penalty corners and one penalty stroke—which was cashed into a goal by Jodie Kenny.

India seemed to be struggling with defense against the Aussie attacks except in the last minute of the match when the Indian team made one final push toward the Aussie half and Anuradha Devi scored Indian’s sole goal to bring a second of smile and bit of cheers to the Indian side.

As I never watched filed hockey for so many years, I was unaware of the new (for me) time frame of the game. Unlike two equal halves each of 35 minutes, now they play four quarters (15 min each). But of the three halves that I saw, Australian players manifestly dominated the Indian team. It will be interesting to see how far both teams take their Olympian quest.