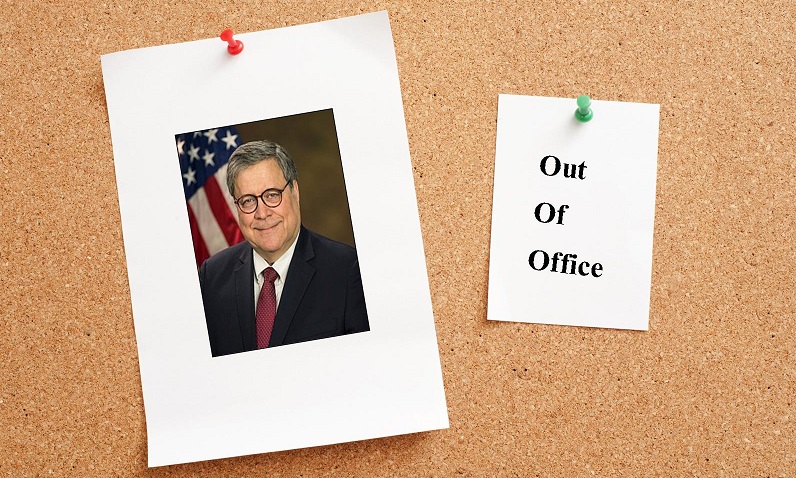 Finally the expected happened yesterday as Attorney General of the United States William (Bill) Barr resigned from his office, leading to a mix of reactions from conservatives.

President Trump announced on Twitter yesterday that Barr would be leaving “just before Christmas to spend the holidays with his family,” and that he has done an outstanding job as an AG. The President also announced Deputy Attorney General Jeff Rosen taking over the AG office as the Acting Attorney General.

Just had a very nice meeting with Attorney General Bill Barr at the White House. Our relationship has been a very good one, he has done an outstanding job! As per letter, Bill will be leaving just before Christmas to spend the holidays with his family…

The news sparked contrasting reactions from the Trump-supporting conservatives on social media. There were those who praised Barr for what he did for the Trump administration. But many also called Barr’s resignation good riddance over how he did nothing to make the big criminals of the deep state accountable for their crimes.

While Barr seemed to have achieved some degree of success as the AG, his inability to indict the supposedly untouchables, like the people from the FBI and the left-wing politicians involved in the spying scandal targeting Trump’s presidency, stained his image as the lead in bringing justice at the higher level of political/criminal hierarchy.

Tom Fitton of Judicial Watch issued a statement shortly after Barr’s resignation news broke, saying that after an excellent start as an AG, the Department of Justice under Bill Barr became a “a black hole in terms of transparency” as it protected the big fish by withholding the release of information revealing their criminal details.

The biggest failure of Bill Barr, however, came in the wake of the stormy 2020 election last month when he virtually disappeared while historic election fraud of all kinds was witnessed and reported widely across the country, showing a deeply rigged election to rob President Trump of re-election and install Joe Biden in the oval office. When he was widely criticized for his absence and inaction to investigate the fraud, Barr issued a statement saying that he hasn’t seen widespread fraud in the election. This put him in the cross-hairs of censure by angry Trump voters who had seen the fraud exposed by the Trump’s legal team and the investigative reporting of independent media sources.

Adding to Barr’s list of failures were two big cases – the two federal criminal investigations into Hunter Biden’s financial dealings, which were hidden from the public for over a year until the election. In effect, by not revealing those to the public or showing any significant development in the two cases, if any at all, Barr virtually gave the biggest boost to Joe Biden’s presidential campaign.

With Bill Barr gone in the history as another AG who failed to lay law’s hand on the biggest evil players, the question of what lies ahead is arousing speculation and hypotheses of possible scenarios. There are those who believe that noting extraordinary should be expected of the new appointees. But some believe the tide may turn and the untouchables will finally be in its line. Steve Bannon said on his show War Room that we can expect special prosecutors to take down the Biden campaign after Barr’s firing – implying that Bill Barr was in fact fired.