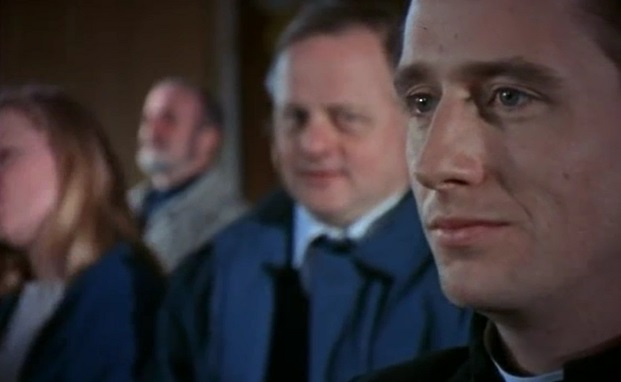 There are movies that by their plot summary on IMDB entice one to pick them for some substance, but once you are past half the runtime, you realize where it’s going. Antonia Bird’s Priest (1994) is one such title.

The movie’s takes for its protagonist a young Catholic priest, Father Greg Pilkington (Linus Roache), whose new appointment in Liverpool brings him to stay with an older and more mature Father Matthew Thomas (Tom Wilkinson). Soon we are shown that Father Thomas has a sexual relationship with the house maid and Greg is a gay who visits a gay bar and gets in bed with a guy. The movie creates an interesting conflict and parallels in characters as Greg learns from a minor girl how she is being abused by her father, but he can’t break his pledge of confidentiality (Sacrament of Penance) to help the girl. And then the movie goes nuts.

Not only does the plot of Priest staggers so as to lose focus and introduce loosely connected subplots – which I’ll choose not to reveal for sake of spoiler avoidance – but also gives away the feel of anti-Catholic/anti-Church propaganda characteristic of a leftist political worldview. The scenes of the two priests saying and doing weird things and the over-the-top ending take away a lot more from the movie than the initial interest and expectations built by the apparent depth of the plot.

Roache and Wilkinson surely impress with their acting skills, and it’s interesting to see Wilkinson playing a different shade of priesthood since he would be seen again as the very pious and selfless Father Richard Moore in The Exorcism of Emily Rose (2005). The direction and editing are engaging far as the plot stays focused and the conflict builds up. But then the movie deflates in a burst and the attempt to make ridicule of the character of both priests fails the bar of coherence set up in viewers’ attention.

Priest could be an excellent movie if not for the seemingly political attempts to play a joke on priesthood in a manner that collapses under its own platitude. The stretching of the plot to include unnecessary and banal events does nothing but create holes in the movie’s coherence. It’s one of those movies that start well but end poorly.