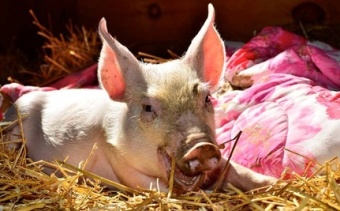 Do animals have to suffer the cruelty of people under the banner of education or research? More and more people now care and believe such inhumane use of animals must stop. As we speak, the lives of more than a hundred pigs are at risk of losing life to medical training programs

at a university in Ohio.

Physicians Committee for Responsible Medicine (PCRM) has launched a petition on its website asking the University of Toledo, OH, to stop training unnecessary and cruel use of pigs in teaching emergency medicine at the institution.

Their throats are sliced open to insert a tube, needles are stuck in their bones, and sometimes they split the breastbone open to access their hearts. As if that weren’t bad enough – all 125 pigs are killed and disposed of at the end of the course.

“There’s no question that using animals in medical training is cruel. But it’s also inferior training for physicians!” says the email message of John J. Pippin, M.D., Director of Academic Affairs at PCRM.

Quite a few petitions have previously asked the University of Toledo to stop the abuse of pigs in its medical training.