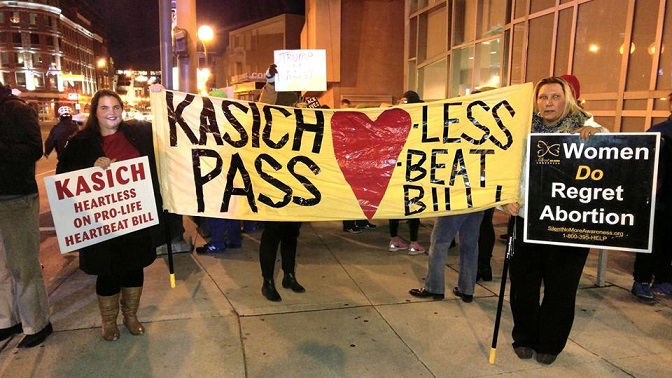 Donald Trump was in Ohio for a Rally on Monday, November 23rd. And it was an opportunity for pro-life advocates to have their voices heard.

There were pro-life advocates outside the Greater Columbus Convention Center for a few hours before the rally began. These advocates were throwing up their signs and letting their voices be heard. The main topic addressed was the Heartbeat Bill. The bill was created to protect a fetus based on the actual heartbeat, which is usually detected at about six weeks or so, therefore proving it is indeed a human being. The group wanted to underscore the fact that Governor John Kasich was indeed not the right man for the role of the President because he does not support the bill. But the pro-life advocates also wanted to know if Mr. Donald Trump would indeed be supporting it.

Janet Porter was the woman who initiated the Heartbeat Bill and she was present. Here’s what she had to say about her campaign.

The interesting thing that happened at the event is now being shared for the very first time. It was a major breakthrough that the pro-life group had with the opposing protesters.

The pro-life group was doing their thing when suddenly out of nowhere, the Black Lives Matter group with about one hundred people came through and began shouting their message – Black Lives Matter! They also had Planned Parenthood on their signs and spoke of protecting illegals from deportation. After about ten minutes of their chanting, the pro-life leader Janet Porter took her bull horn and began saying “Blue Lives Matter Too!”

A few minutes later, people in the crowd from all over started shouting from “All Lives Matter!” The group was moving their way to the end of the building where they all gathered and the leader was continuing to speak out when another senior male pro-life advocate shouted back at them and said, “Yes Black Lives Do Matter and if you really knew what you were standing for with Planned Parenthood and abortion then you would have done your research and read the books that the founder of Planned Parenthood believed in. Her name is Margaret Sanger and she was a racist.” The atmosphere shifted and the crowd was a bit set back when suddenly the leader of the opposing group gave his bullhorn to the senior pro-life gentleman and let him speak again.

Here are some quotes from Margaret Sanger’s books and speeches.

Pivot of Civilization is one of the books she wrote and the quote in the book referring to poor people and immigrants: human weeds, reckless breeders, spawning, human beings who never should have been born. The purpose of birth control written in Birth Control Review, Nov. 1921, page 2, states: the purpose of birth control was ‘to create a race of thoroughbreds’. One more quote on the Handicapped from the Birth Control Review, May 1919, page 12, says: ‘more from the fit, less from the unfit – that is the chief aim of birth control.’ And there is much much more to view for yourself.

Many articles from the main stream media made quotes about Donald Trump and his stand on how to deal with terrorism which is called Waterboarding. It is a form of interrogation used in counter-terrorism. The quote was that he would bring back “waterboarding in a heartbeat”. I began to think about this compared to the issue of the heart beat bill itself and how tiny babies in the womb are treated as if they are a serious enemy, enough to kill. Today our nation is willing to Save the Wales, the Puppies, and the Chicken Hawks because they are federally protected but we are not willing to Save the Babies.

There is much to consider when we choose what we will stand for even if we don’t know what we are standing for at times. Maybe we need to re-think what we are thinking and we may learn a bit more about ourselves. Remember knowledge is power. On that note I am here to remind you that Life Thrives When People Care as we say here on Word Matters.

Learn more about Janet Porter and the pro-life movement at http://www.f2a.org/.