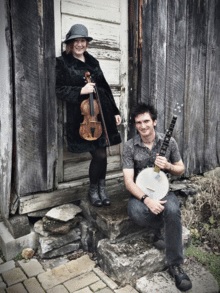 Megan is no stranger to the Folsom Opry House having played here at least four times before. She is a native Californian, eight-time national fiddle champ at Weiser, a talented songwriter, and world class teacher. She also toured with country star Pam Tillis. Adam Hurt has fused several traditional old-time idioms to create his own elegantly innovative clawhammer banjo style, having been introduced to the instrument at age eleven in his native Minnesota. Adam has placed in or won most of the major old-time banjo competitions, including three first-place finishes at Clifftop, and he has claimed several state banjo and fiddle championships. They both conduct many music camps. As always Loretta’s legendary pies will be served for refreshments.