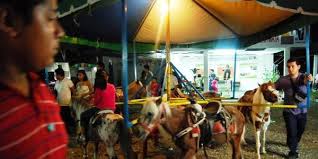 Following a petition that gathered more than 65 thousand signatures worldwide in support of its demand to ban the use of live ponies in carousels, the town of Mijas in Spain has approved the petition, making live pony carousels illegal in the city. This is victory for the ponies suffering abuse in the name of entertainment for children and families.

Abigail Geer’s success story on Care2 rcounts the progress of this victory for ponies in Mijas including public’s role in bringing attention to the misery of ponies that were forced to give rides to children in carousels for hours. People caught their suffering on camera and led to the petition that was shared thousands of times on social media, gathering great support and an international voice against the abuse of ponies.

The ban on using ponies in carousels in Mijas marks an important step in liberation of “beasts of burden” from unnecessary burden of entertaining people at the cost of their health and wellness. There are such carousels in others parts of the world, including some in United States. Hopefully they’ll learn from Mijas and relieve ponies or other animals used in entertaining people when they should actually live free in nature or be useful to people in non-abusive ways.