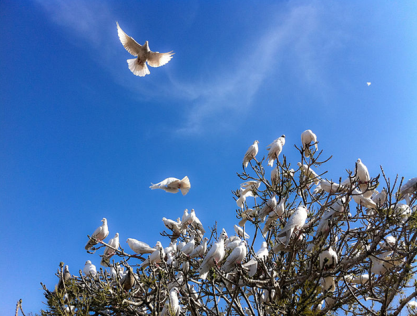 A typical afternoon passes quietly. A good nap never hurts, generally, it’s anywhere from one to two and a half hours. Lunch was good, on any given day, it may be beef and bean burritos with green chilies. It may be microwave bologna, or whatever else is handy. 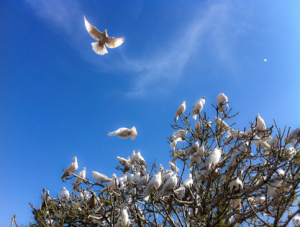 If Dear doesn’t have to work late, she arrives shortly before four in the afternoon.

“Get dressed and go with me.” She says.

Once bills are taken care of, Dear drives to daycare to get the children: Elisa Ann, Eight, and Noah Matthew, six. They are better known to my readers as the Doll and Bubba.

When they get in the car, the circus begins, so to speak. They tend to antagonize each other, and to get on Dear’s nerves.

I tend to step in on Dear’s behalf.

“You make me irritated when you get on Dear’s nerves.”

“It doesn’t matter who did what, it needs to stop!”

It all boils down to a simple concept that the kids don’t understand yet. We have enough to deal with without them fighting among themselves. I do understand that they are small children, and they don’t have the grasp of life that we do. They can’t put the legos of life together and make them fit.

When my sister’s kids were young, I told them the same thing. It didn’t matter to me who started the fracus, they needed to work together as brother and sisters. I am very strong on that issue.

Perhaps my outlook stems from the baggage of my dysfunctional upbringing. Susie and I almost never got along when we were growing up; we fought like cats and dogs. Susie was jealous; she was afraid that I would get more than her. If the truth was known, I got less than her, even though I did enjoy the material luxuries of new record albums, radios, and rubber bugs and dinosaurs. What I wanted was to live with Dear and Mamma and be left alone. They were my caregivers; and my source of security. When Susie and I grew up, we finally formed a decent relationship. When my first cat died, Susie found Misty, who was the replacement for the first cat. During Susie’s funeral service, I related the story of Misty to the guests who were there. It was the least I could do.

When one faces death as many times as I have, then one is left with a more urgent sense of the importance of life. We may have it today, and lose it tonight. No other episode brings that in to focus more than the September 6, 2014 trip to MCH. My temperature was 102.2, and Dear thought a trip to the E.R. was in order. She was right, later that night, I lapsed in to septic shock. My blood pressure was 72.52, and my heart rate was 125 beats a minute. The next morning, I had a spasm in which I began to breathe too rapidly. I stayed in the hospital until the 12th. One of the doctors told me that the only antibiotics that would touch the E. Coli that I had were in the penicillin class. I am allergic to penicillin, but agreed to accept Ceftin at home. I even asked Dear if I was leaving against medical advice, and she said no. During my most recent hospital stay, I told the hospitalist, (doctor), that I believed I came closer to death as a result of septic shock than I did from the accident in June of 2014. His response:

“That is a valid assessment!”

What would have happened if the doctor who saw me in September of 2014 had told us that nothing could be done, and that it was only a matter of time? When one faces this kind of challenge, one becomes more aware of how precious life is. Even though this isn’t the only life we have, what we do today will have direct bearing on our journey when our time in this existence is through. When somebody goes through the challenges that Dear and I have faced, then you see how easily it can be to take the most important pleasures for granted.

I have always enjoyed going out to eat with Courtney, Eric, and the kids. Often, the kids get rowdy when they are in a restaurant; why they act out when they are with us is a mystery. We love those children more than life itself. I want them to grow up to be responsible, caring adults who make contributions to the world in which we live.

One time, they were fighting over who would pick up the toys after playtime. When Dear had enough of the squabble, once again, I came to her defense.

“Life is too short for this!” I told the kids.

“It doesn’t matter who did what, you need to learn to work together.”

Finally, Courtney walked in and made the kids pick up after themselves. We went to IHOP that night, and as usual, the kids fought over who would sit where. Once again, I repeated the same instruction that I gave them earlier. Dear broke in.

“They don’t understand all of that.”

“Dear,” I said. “Maybe they don’t get it; not right now, but if you catch them young, and teach them early, one day, they will understand. And I hope they never have to go through what I have been through to figure that out.