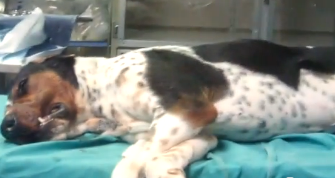 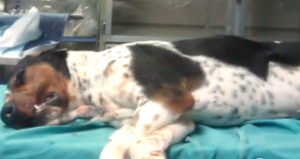 institutions like Georgia Regents University (GRU), where they are literally torn to pieces and killed after inflicting unbearable pain on them.

What happens to dogs behind closed doors in the name of research is shown in the undercover taped investigation conducted by the Humane Society of the United States (HSUS). Their video on YouTube with narration by Kim Basinger shows the research lab pulling dogs’ teeth out on an operating table, with the bodies of bleeding dogs then dumped in plastic for disposal. The “research” thus buys dogs from sellers, brutally uses their bodies for their for-profit institution, and dumps them dead when they are done.

One of the victims of GRU research is a dog named Shy Guy whose scared face in the lab cage flashes on screen a number of times. He is shown being operated upon and then dumped dead into a plastic bag. And this nightmare keeps happening on an ongoing basis without being spotlighted in mainstream media!

HSUS has started an online petition on their site, demanding of the USDA to “make random source dog and cat dealers a thing of the past”.