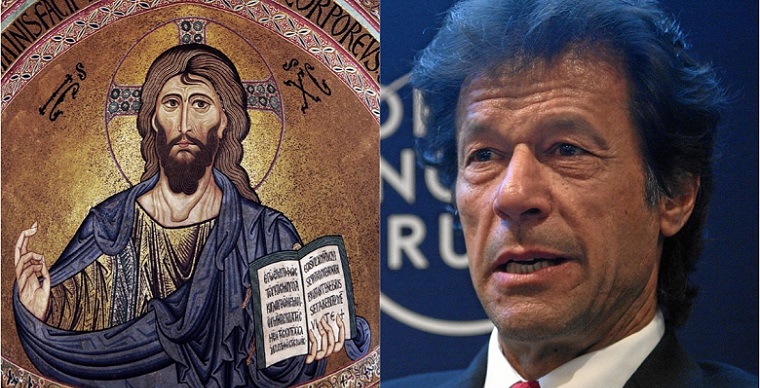 “Jesus Christ is not mentioned in human history at all, although Moses has a little bit of mention.” This statement came from Pakistan’s Prime Minister, Imran Khan, earlier this week.

Khan made this statement while addressing a gathering in the federal capital Islamabad on the occasion of Islam’s prophet Mohammad’s birth anniversary—which is a public holiday in Pakistan. Indian media and quite a few international media sources like Russia Today wrote about the reaction to the statement.

Imran Khan is known for his rash, thoughtless, and empty talk for decades. With his recent statement on Jesus in history, Khan took his public display of ignorance to a whole new level. Twitterers did grill him and mock his ignorance, some expressing shock and disbelief at his level of lack of intelligence.

What is noteworthy is not just Khan’s idiocy but the categorical blackout of the lamestream propaganda media on this incident. True that Khan isn’t a celebrity with the west as world’s real famous and infamous leaders occupy the pages of papers and tabloids. Maybe they don’t still know he said it. But also possible is the preference of theirs not to humiliate him as long as he isn’t trying to correct Trump in his tweets.

Khan’s statement about Jesus comes at a time when the country’s blasphemy law is under criticism from both within and outside the country and a Christian woman Asia Bibi was freed from jail recently after 8 years of imprisonment on death row on blasphemy charges. Her crime? Just questioning the achievement of Islam’s prophet when provoked by Muslim women of her village over her religion.

I guess if one asked in ignorance whether Prophet Mohammad had any mention in history, it would be a blasphemy in Pakistan. But then Imran Khan is excusable, given his background and his U-turns.

One thought on “Jesus Has No Mention in History, Says Pakistan’s Prime Minister”