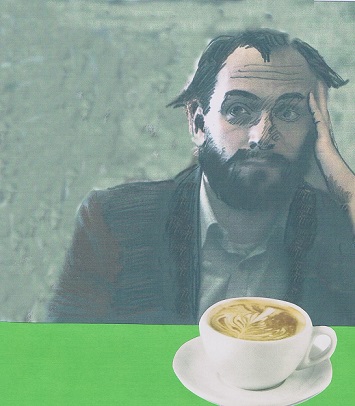 Grocery shopping had never been his thing, but since his wife’s license was suspended and she was unwilling to risk driving without it, he had an undesirable trip to anticipate as he lay in bed, unable to sleep because of the headache that had been lurking for a week. He’d get it done as early as possible. He couldn’t sleep anyway. She should be a better driver. He kneed her lightly out of spite, pretending it was a night tremor.

“Hey, I was thinking about your driving anxiety. Maybe that’s where the headache comes from,” she said, surprising him with her consciousness. Eugene laughed out loud.

“I wish it were that simple. I’ve been thinking about when you got your license suspended.”

“If taking bus or train stops the headaches, isn’t it worth it?” she asked. It was her style to ignore barbs.

“Can’t you just get the groceries? There aren’t going to be any cops between here and the store if you go early.” She went to sleep again without answering.

“Don’t forget the list, Eugene!” she called to him as he headed for the stairs a while later. She was right, he’d decided. Taking the bus will help, maybe even solve the problem. He had little patience or focus of attention, and the last few days were some of his worst on the road. Caroline was not a good driver and he was failing at it as well. Maybe one last trip and then get a bus ticket tomorrow, he thought. On her way down the stairs a few minutes later, she reminded him again.

The only thing that seemed to help him calm his throbbing nerves was black tea – part of his British heritage. He grabbed his keys and pulled on his overcoat on his way out, but then realized he was still in his pajamas. He went to the washer and dryer to find some clothes, but they all belonged to Caroline. He went to the kitchen for a glass of water and grabbed the grocery list off the fridge as he drank the water. “Clothing, too,” he reminded himself as he finished the water. He dropped the list on the little counter by the fridge, but not before crumpling it up to show his disdain for the grocery store.

“Don’t forget the list, Eugene!” his wife called from across the kitchen. That was the third time in the past hour that phrase had reverberated through their house. “I got it, dear…” Eugene muttered under his breath as he walked past her and up the stairs on the far side of the kitchen. The thump of his footsteps on the stairs carried an extra weight that night—a weight that was compounded by his lack of energy and his unwillingness to make the painfully dreadful trip to the grocer. Eugene threw on some clothes from the pile that had been accumulating on the floor for the past week and headed back down the steps. He cast his hand in a lazy flop on the list on his way out. That phrase echoed through the halls of their home again and chased Eugene out the door.

The supermarket, as usual, was a nightmare; finding a parking space, was not easy. Walking to the store, Eugene stamped on the ground. “Dammed list!” He cried out. He pulled out the lining of his pockets. There was everything but the list. He placed a dime in the slot to release the chain and catch connected to a queue of trolleys and wheeled into the store. Starting with fruit and vegetables putting things in the basket from memory, he grabbed a couple of bags of cereal packed with dry corn and fruits. He made the action to sniff as he saw the label Nescafe on a pack of black tea. Standing on tiptoe, he reached up to take down his selection, and held it close to his nose when the phone rang. He dropped the phone into the basket.

Back at the car, he opened the dashboard. The list was staring him in the face. As if his eyes should pop out of his head, he felt the need to kick himself and went back to the store. Driving back home he took long deep breaths, inhaling through his nose and slowly out of his mouth.

Eugene looked up from the kitchen table and noted the sunlight beginning to gain the horizon. Between its angular framing, the bay window above the sink presented a living, modern portrait that served Eugene as a watershed. Relief soared cloyingly throughout his exhausted mind and nerves as silhouettes of nature and neighborhood came into focus. This morning had been particularly delayed, but perhaps it arrived as a symbolic turn towards reckoning a personal era of long nights and distorted time. Eugene began to wonder how long the scene would remain within his recall but, reminded of the burdens of a sleepless night, decided that some moments deserve the absence of wonder. There was adequate comfort in knowing he had found a new path. For now, Eugene could leave the details to his passive imagination.

“Caffeine!” the word flashed like a thunder in his head. He turned around electrically and almost leapt at the kitchen cabinet overhead, opened it and pulled out the tea pack. The label “Decaffeinated” in bright green on the front of the pack met his eyes. The headache returned, his nerves throbbing in his head, but he was smiling now. He turned around triumphantly, showing the pack to Caroline, and said, “Time to fix this head at Starbucks!”

One thought on “Interactale 8 – The Easy Fix”