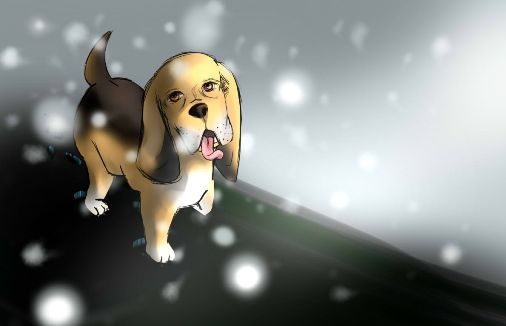 It was the first snowfall of the season. Under the brightly glittering halo of the street lamp, an old dog was wandering the 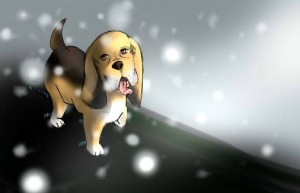 streets, looking for warmth and shelter from the unexpected cold snap. The dog was large, mostly yellowish brown but with some white trim on his chest and paws. His age was given away by the graying around his muzzle. He wandered up to the back door of an Italian Restaurant where the owner had an affection for him and fed him scraps daily.

The dog sat down near the door as the heat from the kitchen warmed him and his paws. He gave out a gentle howl to let the proprietor know he was there.

A door swung open and out stepped a tall, portly man. Beaming through a countenance dashed with signs of aging. On the frosty coating that chilled under the inveterately resilient darkness of winter, the old dog sat, trying to catch the last few inches of depleted warmth and light that that appeared in infinite source beyond the threshold, just steps away.  His eyes stayed fixed on the owner, proudly extending a wooden bowl above a satisfied smirk before crouching in front of the old dog, revealing an immodest spread for any canine wanderer.

“Carrot peels, chicken fat and pesto over Friselle,” the man said. “What do we call this dish?”

The dog barked and dove into the scraps of food, devouring it in seconds,
his tail wagging the whole time.

“Well, at least you like my cooking,” the man said, smiling and shaking his head. “How about we call it Blackie’s past du jour! That sounds like a fine name.”

The man patted the dog on the head and removed a small flask from his chef’s coat. He looked around to make sure that no one was spying on him, took a long tug off the flask, and put the flask back in his pocket.

“Ahhhh…. that hits the spot. Warms the old soul. I know you must be cold, old fella, but you can’t have a nip of this stuff, is no good for doggies. Well, I have to get back to work, old boy, but I will set some warm milk out for you so you can warm up your insides as well. Tell you
what, I will make you a meal fit for a king for our 1 month anniversary tomorrow. You will have been eating at my establishment 1 month to the day. Hey… King! Maybe that is a good name for you! Well, King, any requests for your special dish?”

He took a table napkin, held it with his finger and thumbs at each end, gave it a spin, and tied it around King’s neck. “There you go old friend,” I’ll go and fetch some warm milk. Once inside his kitchen he heard a bark and ran outside to sounds of a slammed door and screeching rubber.

King was barking in stereo as dogs jumped, chocking from rope around their necks tied in a van and driven to a wooded park area.

A large man wearing a sheepskin coat holding a shot gun opened the van rear doors. King growled with dripping jaws. There was a “crack,” and King fell flat on his side.

A rope was threaded in and under the colors of the dogs then savagely, pulled out from the van. King’s napkin came loose from his neck.

The man holding a torch cocked his shotgun, and began to shoot the dogs, when King leaped up at the man’s arm, pulling him to the ground!

Another crack rang through the woods along with a wooden crunch above them.  With the man’s arm in his teeth and the gun laying a few feet away, King looked up and saw a tree branch falling toward them. He let the arm go and backed out of the way of the branch, teeth bared and growling to keep the man at bay.

The branch came down, knocked the man out cold. The other dogs ran off, but King stayed with the injured man, wondering if he would wake up and give him some warm milk.

2 thoughts on “Interactale 5 – King of the Snowy Night”