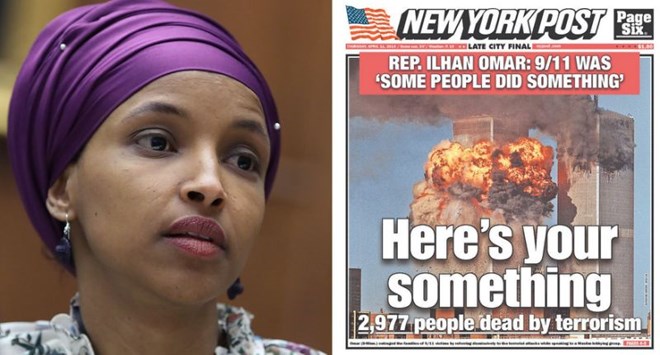 Since her election as a congresswoman in November 2018, Democrat representative Ilhan Omar has drawn nationwide attention, and in many cases, ire, for her open hostility toward America. The Somali Muslim refugee, who became an American citizen and is one of the first two Muslim congressmen in the United States, Omar has been in news for years over her shady past and a very clear agenda-driven current role against American interest. Yet she is being promoted by leftist propaganda cartels – aka “media” – and her democrat colleagues as a victim of racism (feel like throwing up already, right?)

Overlooking the allegations of her immigration fraud (she allegedly married her brother to get him a US citizenship—something she denies but has no proof to refute), Ilhan Omar drew wide-scale condemnation by the conservatives for her anti-Israel tweets shortly after she was elected. She apologized and deleted the tweets and her Democrat gang covered up for her with House Speaker Nancy Pelosi attempting to rationalize her tweets by arguing that Omar probably doesn’t know English very well and so she likely didn’t mean what she said (seriously Nancy?).

But the more news came out about Omar’s advocacy for Islamist terror, the more people got to know what Omar really represents—the anti-American and anti-“infidel” agenda that is common to most Muslim immigrants from shithole countries into the US and the west.

First came the revelation that almost immediately after stepping into the office as a congresswoman, Omar wrote a letter to a judge in MN asking to show “leniency” and “compassion” toward a group of Minnesota men accused of trying to join the Islamic State terror group. The men faced decades in prison if convicted—and was it surprising that they were Somali Muslims from her own community! What kind of a “lawmaker” wants compassion for aspiring terrorists actively seeking recruitment to ISIS?

This pro-ISIS move of Omar was conveniently tucked under the rug by leftist propaganda cartels and instead they started churning out posts about Omar’s tweets and her apology—that time-tried strategy of creating the red herring and making it fly all around so that one doesn’t get to see what’s really out there.

More recently then, a series of new pro-Islamist and anti-American acts by Omar brought her back in the firestorm of controversy and condemnation. First her participation in raising funds for causes that are directly linked to Islamic terrorism—mainly propagated in the US by the so-called Council on American Islamic Relations (CAIR). Then Omar openly advocated for the release of a Muslim Brotherhood leader Hoda Abdelmonem, who is held in Egypt for her ties to Muslim Brotherhood—the Islamic terror group. That too was treated as trivial by leftist propaganda cartels, or else it would be a huge public outcry to have someone in the House worried about the release of an “activist” held on suspicion of terror-affiliation in a foreign country.

And if that was not enough, Omar drew a new storm of fury from patriotic Americans when she made comments trivializing the biggest terrorist attack on US—9/11.

“CAIR was founded after 9/11, because they recognized that some people did something and that all of us were starting to lose access to our civil liberties.”

The “some people did something” was not something any proud American would take kindly or lightly. So, while the leftist propaganda cartels teamed up, as expected, to defend and make excuses for Omar, angry Americans took to social media and roasted Omar with comments and memes showing her her “something” with the image of Twin Towers under Al-Qaeda attack juxtaposed to her comment in quotation. And this time, President Trump joined the Americans, tweeting a video of the American response to Omar’s “something”.

What happens when Trump says something, particularly against an Islamist, in his tweets? The left goes amok along with its propaganda mobs. So Nancy Pelosi had to come to her gang’s defense and asked for security for Omar. But is Omar really at risk—especially after some caller who called and said something and now they are pretending freaking out as if Omar was under serious threat?

Given her open advocacy for Islamic terrorists and her anti-American attitude, it is obvious that Ilhan Omar is a threat to American security and it is the average American that is at risk because of her advocacy of Islamism and active efforts to help intended terrorists—not to forget that Omar remains on the House Foreign Affairs Committee. She has been marked as a terrorist by patriotic Americans on social media, and even if protected by the deep state leftists, Omar cannot be considered safe for America or its well-wishers.