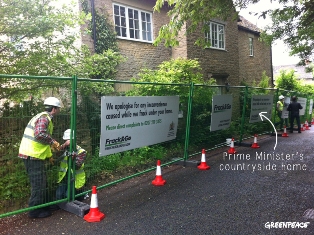 “David Cameron wants to change the law so fracking companies can drill under our homes without permission,” informs a page setup by Greenpeace where the environmental activist organization is hosting a petition to ask parliament members for voting against Cameron’s plan to allow fracking by change in fracking law.

An email notification from Greenpeace, circulated yesterday, tells that  just before the Queen’s Speech, Greenpeace activists arrived at David Cameron’s very own home where they set up a fracking site for demonstration against Cameron’s pro-fracking plans.

The Greenpeace message says that allowing fracking in Britain is akin to auctioning off Britain to the fossil fuel industry. Owing to the political tension between Russia and Western Europe, particularly in the wake of recent conflict between US-West and Russia over Ukraine issue, Europe is said to be willing to turn to fracking to cut dependence of Russian fossil fuel.