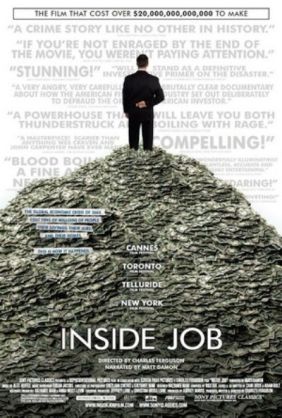 What led to the 2008’s global financial crisis that left millions jobless and drove countless near the poverty line around the world? This film says it all.

Winner of the 2010 Academy Award for Best Documentary Feature, Charles Ferguson’s Inside Job takes viewers across 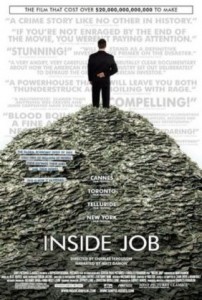 the connections in the financial industry whose global crisis culminating in 2008 left millions of people jobless, homeless, and on the brink of poverty.

The film explains how the global financial system evolved since the Great Depression, its weaknesses resulting from the increasing mergers of financial units such that a few finance giants engulfed the rest of the system (and money, of course), and the politics of deregulation that furthers the risky business of investing in a system that appears rational, but is otherwise.

Ferguson’s film introduces viewers to the concept of “derivatives” – complex financial products of the 1990s – that lie at the heart of this global crisis – used by bankers to bet on anything no matter how risky its assessment. The film then explores the Securitization Food Chain – the new system of loans based on Collateralized Debt Obligation (CDOs) – and its fragility. It was this system that brought the world of investment down in 2008.

So who benefited ultimately and who paid it all? The businesses suffered; so did the worker, the man walking down the street; and the investors of course; but not the top executives whose assets remained intact. They did benefit; so did the prostitute living near Wall Street who did these people of class at rates of $1000 to $1600; maybe the five-star hotels and luxury resorts. Humanity, on the whole, suffered as billions belonging to the masses went into a handful of pockets.

But what about accountability? If people risking others’ money on bad bets were responsible for this crisis, why weren’t they brought to justice? It turns out that the financial giants have secured themselves against accountability because their very nature allows risk-taking. It’s a big gamble and the “managers” are not accountable for any bad bets. Ferguson’ films remarked how the federal prosecutors used Eliot Apitzer’s personal vices (referring to the 2008 prostitution scandal leading to his resignation as New York’s Governor) to force him to resign in 2008 but they did not extend the same enthusiasm to the Wall Street crisis.

The final section of the film concludes with a million dollar question: where are we now? Showing how the same people responsible for the financial disaster were allowed new top-notch positions in the Obama administration.

The film ends on a note for all of us to take home: some things are worth fighting for – this while the screen shows the statue of liberty, reminding us how deeply we have stepped into a form of slavery where our minds, our faculties of thinking critically and examining thoroughly have been compromised by the luring tales of financial success – the big American dream– which is as shallow as a bubble.

Inside Job is an eye-opener of a film, thought-provoking, and motivational – an opportunity to see what happens when we stop being people and live as financial units – subjects or objects – in a society that rewards neglect and hates care.