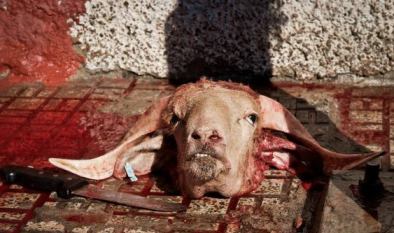 This Tuesday, the Islamic world is celebrating the annual festival of Eid-ul Adha, which basically is three days of reckless 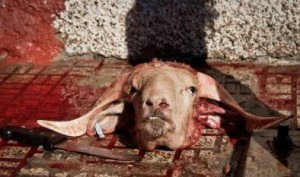 slaughtering and murdering of helpless, voiceless animals with the purpose of pleasing god.

Eid-ul-Adha is “celebrated” by Muslims to commemorate the “sacrifice” of Abraham’s attempted slaughter of his son, something which god “allegedly” intervened in and threw in a lamb to be killed instead of the child.

On both literal and metaphorical levels, the story of Abraham is dehumanizing and nonsensical. It centers on killing and slaughter and misleadingly labels the act as a show of sacrifice. Ironically, some Muslims even try to mark – or mask – the occasion as that of peace and solidarity.

In centuries of ignorance and convenient twisting of the meaning of “sacrifice” and peace”, Muslim societies have thus been sanctifying aggression against the helpless, directly reinforcing the feeling that killing is okay as long as you label it as a religious duty, sacrifice, sacred tradition, ad nauseam.

But what if there was a god and he/she/it really wanted you to kill an animal?

My answer: who wants to please a god that seeks satisfaction in spilled blood of helpless “creatures”!