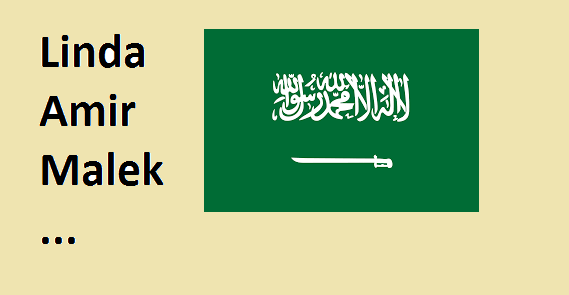 All kinds of stupidity can be – and is – expected of the Saudi regime. Believe it or not, Saudi Arabia even banned some 50 baby names, means Saudi citizens can’t name their children with names on that list or else they would be targeted by the Saudi regime.

While the news actually appeared in papers last year, I never learnt of it till today. My bad of course, but then I was busy in my studies and work.

The story says the interior ministry of Saudi Arabia slapped this ban on 50 names for babies, including names like Malek, Malika, Amir, Abdul Nabi, Linda, and others. The Saudi ministry finds these names as “inappropriate” “foreign” or even “blasphemous”.

Did we read “foreign”? Interesting since the entire Saudi Arabia – expect for its deserts, camels, and unbelievably stupid people – is either imported or foreign-supported. The bombs it’s dropping indiscriminately on Yemen today are foreign-made; maybe someone named Linda or Benjamin oversees the manufacture of these bombs or the cars the Saudi royalty can’t live without.

As of now, breathing, eating, and shitting without prior permission from honorable Saudi ass-cellency are still allowed. But who knows?