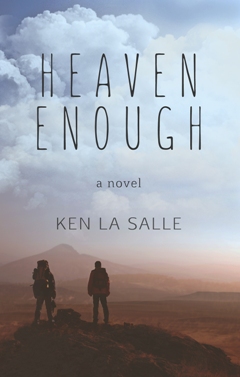 Since the 1920’s, the idea of the Pacific Crest Trail has inspired people from around the world to achieve more and to be more while connecting to the western crest of the United States and the Earth from which they were born. Before its completion in 1993, the Pacific Crest Trail (or PCT) saw thru-hikers from around the world. Then, in 2012, Cheryl Strayed popularized the PCT with her dynamic memoir, Wild.

Strayed’s is not the only story on the PCT, however. There are, in fact, thousands.

Recently, the PCT has also begun inspiring novelists to place their stories amongst the switchbacks and water caches of the trail. One of those writers is Ken La Salle, who placed his romantic tale of lost souls in the first stretches of the trail, giving it the name Heaven Enough. The title refers to a poem left by the wife of the story’s protagonist, after she suffers an untimely death. “What would it be like if I had Heaven Enough,” it reads. When Matt, now a widower, takes to the trail to leave the ashes of his wife, he is met by a woman just as shattered by life as he. Her name is Heather.

Without the crucial ingredient of the PCT, this might become just another love story. But it is the PCT that tests them, that breaks them down even more, that takes from them everything but who they truly are. That is, after all, the power that the thru-hiking experience provides, a method of stripping away all the nonsense of everyday life. Novels placed in this environment benefit from this power in an environment as uniquely American as the Pacific Crest Trail.

Heaven Enough has been called “a strong narrative of redemption and hope” and “the perfect book to curl up with on a rainy day” by reviewers. One reviewer wrote: In a journey of self-reflection, Ken La Salle asks the one question we never really ask in marriage: do we really know the person we love most? In the heart-wrenching and sometimes comical journey of Matthew (Matt) Murphy, Mr. La Salle shows us through tragedy, anger, remorse, and grief one can find their soul and true purpose in life in the least likely places.

You can find Heaven Enough in ebook and paperback from Limitless Publishing (http://www.limitlesspublishing.net). Ken La Salle can be reached through his website at www.kenlasalle.com.